The Soul Calibur franchise has always been known for its graphics and art style, but not only were previous editions of the game more physically realistic, their more primitive graphics allowed for a level of abstraction that gave artists some stylistic wiggle room. Comic books are certainly as guilty of unrealistic physics as videogames, but comic books are descendants of tall tale and are about exaggeration. In games, particularly at the levels achievable by modern graphics, we are straddling the uncanny valley and are more beholden to emotion and physical law. Pornographic endowment is fine if you're laying on your back; for athleticism it is as unrealistic as big rigs that fly. And for some reason, revealing shots are deemed appropriate on women but not so much for men. 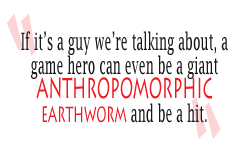 Seeking SAF; 30+ Need Not Apply
Game heroes come in all shapes and sizes. They can be short or tall, bald or long-locked, pouty or stern. We have middle-aged heroes and young heroes, human heroes and alien heroes. If it's a guy we're talking about, a game hero can even be a giant anthropomorphic earthworm and be a hit, but a girl? She'd better not be even slightly unattractive, much less an annelid.

"In the maiden, mother, crone trio, we really only see 'maidens' as game heroines. That is, they're all young and beautiful. We don't really see mothers, and we definitely don't see crones. Heck, we don't even see married women. All game heroines are meant to be available."

The double standard doesn't just exist for age, but for identifying marks and physical deviation, as well.

"Whilst it's true that many male videogame characters are young and muscular, most of them have the benefit of being fully clothed. There's also your fair share of 'average Joes' - characters that aren't male model attractive, wearing non-descript clothing: Max Payne, the male leads in Silent Hill, etc. There's also your scarred chappies - can you imagine any publisher greenlighting a project where the female lead was as battered as Raziel?"

I had a male friend and World of Warcraft player tell me many men would hit on female Tauren avatars but not female Night Elves, because the female Tauren were sure to be women. Only women, he said, would be interested in playing a character that was literally a bipedal cow, where the butt they were watching for most of their gameplay had a tufted tail.