But this is not really about objectification so much as it is about homogeneity. Identifying attributes give a character, well, character, and often are clues to their history. Raziel would not have been Raziel without his missing jaw and warped frame; when will we see a heroine with that kind of epic history? When will we see a mother take up arms to protect her children?

It's My Party and I'll Cry If I Want To
In his book Killing Monsters: Why Children Need Fantasy, Super Heroes, and Make-Believe Violence, Gerard Jones discusses the enormous success of Pokémon with pre-teen girls and cites the huge upsurge in the popularity of manga in the U.S. as a gap-filling force resulting directly from the failure of American comics to address the interests and emotional needs of young women. As with many elements of the comic book industry, this too should serve as a cautionary tale to videogames; although most of the hardcore industry is still, as we can see with Soul Calibur, still in the little boys' club, it is surely no coincidence that Nintendogs and Animal Crossing appeared in Japan first. 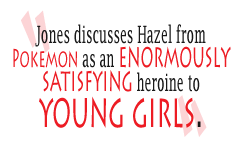 In particular, Jones discusses Hazel from Pokémon as an enormously satisfying heroine to young girls. She is intensely feminine, preferring only the cutest of Pokémon, yet when she leaps into action, she is as formidable as any of the boys. And perhaps most uniquely, she is prone to bursting into tears when frustrated or sad. These tears, rather than resulting in pity or disdain from her peers, are in fact a respected weapon on their own; Japanese characters, by and large, respect and fear the severity of a girl's tearful outburst much in the way real people would react to such a display in life.

"I want an emotional heroine, one that feels and has compassion, one that perhaps changes her own actions because she is aware of the harm they may cause others. Give my heroine a PMS day where she, unexpectedly and without reason, decides to pull the ears off small bunny rabbits. Have her try to leave the house and go back to change shirts four times. Let her have some upper body limitations and figure out how to manage using her legs. Make her a woman, not a man with boobs. That's what I want in a heroine."

In media and in storytelling we are taught to avoid tears. Let your characters cry, conventional storytelling wisdom says, and your audience will not have to. Crying is seen as an action that will result in judgment and a perception of weakness, when in reality it is as human - and physical - a response as falling when struck or shivering when cold. And by denying our characters these realistic reactions, we are denying them that level of humanity.