I have a dream.

Somewhere in the uncharted plains of videogame potential, in the wild primal cloud of yet-nascent human ideas, is my perfect heroine. I don't know what she looks like or where she's from, but I know she's a manifestation of despair and triumph, of trial and overcoming, of badass throw-down and ephemeral grace. She's a creature of fire and passion tempered by intellect, of depth and history and complexity. She will surprise me and challenge me, and when we bring down her arch-nemesis - perhaps a phantom from her past, perhaps a threat to all she stands for - our unified victory will be unmatched; the world will echo with the lamentation of our fallen foes.

And I know she has never seen life on the screen. This is not to disparage the recent upswing in engaging heroines: With Beyond Good and Evil's Jade and Half Life 2's Alyx Vance, Warcraft's Jaina Proudmoore and Dreamfall's April Ryan, the heroine scene is far from a hopeless one.

But there remains, in the heroine topography of the collective fabric of the game world, something missing, something unsatisfying. And the fact we can count satisfying heroines on one hand isn't reassuring, either. So I set out to find what was wrong with game heroines and where the landscape remained unexplored.

Someone Call the Brambulance
When I asked the ladies of the IGDA Women in Game Development SIG what was wrong with game heroines, the obvious came up first: painful physical endowment and what Blitz Games developer Kim Blake called "combat lingerie."

"Pants. I just like my heroines to be wearing pants."

Watching as the discussion spiraled into a laundry list of bawdy attributes, I couldn't help but take a closer look at the advertisements for the latest installment in one of my favorite fighter franchises: Soul Calibur IV. It looks great; it will most likely be a bestselling game. 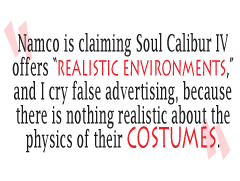 Guys, honestly: This is painful for most women to look at - not because it's offensive, but because it looks like it hurts. If nothing else, someone just needs to get these poor women some underwire support. Seriously, ouch.

"Not to mention walking in heels damages the ligaments and tendons in your feet, making you prone to foot injuries. I wince every time I see someone in plate mail heels. Worse, though, are the tight-fitting bits of metal. I mean, really, did it ever occur to the artist exactly how she was going to strap that stuff on and squeeze herself in? I think mammogram machines look more comfortable."