Videogames are violent affairs. No gamer can deny he's committed hundreds of awful acts that in normal society would have him captured, maimed or killed in retaliation. Not that all violent acts are evil, but it's safe to assume at least someone would be upset that his loved one was not coming home from the battlefield. Players never really think about the consequences of their virtual violence, and that is by design.

In most games, the player assumes the role of the hero. Even though he may kill countless enemies, these enemies are usually evil characters (be they zombies or Koopa-Troopas). A commonly held axiom in game design is people don't want to think about the morality of their actions while playing, they just want to be entertained. The plethora of WWII games released in the midst of, what is to some, a morally questionable war in Iraq suddenly makes sense. Nazis are bad, everyone can agree. Playing games like these doesn't make the player feel as if he's doing something wrong. 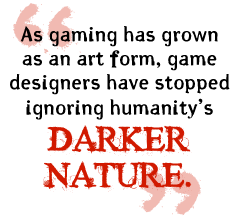 But as gaming has grown as an art form, game designers have stopped ignoring humanity's darker nature. Nowadays, people who want to take a vacation to the Dark side don't have to look any further than their nearest GameStop. In any number of games, there are evil endings, evil dialogue options and evil characters to explore.

But what does playing an evil character in a videogame say about the player? Do these games offer insight into the psyche of the average gamer, or is it just meaningless play, psychologically speaking?

In 1971, the Stanford psychology department conducted a special experiment in its basement. The experiment, later known as the Stanford Prison Experiment, was commissioned by the U.S. Navy in order to find a way to alleviate discord in its prison system. Dr. Philip Zimbardo, who signs his emails "ZIM," ran an ad in a local paper advertising for participants in a "prison simulation." He received 75 applications and hand-picked the 24 subjects he deemed the most stable and emotionally healthy. Half of these were randomly picked to be prison guards, and the other half were to be the prisoners. These lucky few were then mock-arrested, mock-hand-cuffed and mock-thrown in jail.

The guards, dressed in para-military khakis and armed with wooden batons, exercised control over the prisoners with increasingly sadistic methods. Some of the prisoners bore the ill treatment and their dress-like muslin uniforms silently, while others rebelled both vocally and physically. After several prisoners experienced extreme depression and anxiety, as well as psychosomatic rashes, just two days into their incarceration, they were excused from the experiment. Hmm, you'd think that was a clue that the situation had escalated to something very sinister, but ZIM continued the experiment with alternates.

Critical Miss: Why Rust is The Best Game Ever The Wooster 60 Comments

Letters to the Editor: Who Are You? The Escapist Staff 0 Comments
Comments on