Let's face it: The future's looking pretty bleak. An authoritarian government keeps a tight grip over its citizens, has outlawed art and pours chemicals into the water supply to keep the population docile. A great hand reaches down from the skies to spread a warning to all mankind: If we don't change our ways the world will be wiped clean, so we've got one final chance avoid the coming apocalypse. But we won't embark on this mission with guns, there won't be any conveniently placed health packs, we don't even get a trusty crowbar, because this isn't a videogame. It's Year Zero, Nine Inch Nails' new album and the alternate reality game (ARG) that surrounds it. 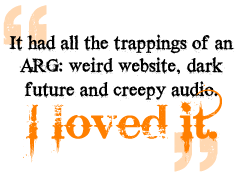 By the time I heard about Year Zero, the story was already under way. I was at a house party when one of my friends played a NIN track I hadn't heard. He explained what I'd missed so far: Remarkably eagle eyed fans had noticed the new NIN tour shirt had highlighted letters that spelled out "iamtryingtobelieve.com," which, along with other sites in the same IP range, gave snippets of a story about the dystopian world of Year Zero, 15 years in our future. Soon afterward, USB drives found at NIN gigs contained tracks from the coming album, along with imagery and messages hidden inside audio static. It had all the trappings of an ARG: weird website, dark future and creepy audio. I loved it.

After that, I casually followed the Year Zero ARG until the album's release, but for many people it became an obsession. I spoke to Polly Munns, a long-time Nine Inch Nails fan who followed Year Zero, to find out what she made of the experience: "I thought it sounded cool but wasn't hugely interested at first. Then, I started reading some stuff about it myself on the NinWiki and got hooked. I liked following the trail and seeing how each new discovery unfolded from each clue. Once I got into the game, I spent huge amounts of time on the forums, reading and contributing to posts there, and checking the sites for updates. I wasn't the first to discover any new sites, but I was the first to solve clues on one of them, which was fun."

Historically, most ARGs have been marketing campaigns designed to generate buzz about upcoming products, like Bungie's Halo 2 or Stephen Spielberg's AI. As popular as Nine Inch Nails remains, it's not exactly in the same league as Microsoft and Warner Brothers when it comes to the amount of cash it has to spend on marketing. Reznor himself said to his fans, "The term 'marketing' sure is a frustrating one for me at the moment. What you are now starting to experience is 'year zero.' It's not some kind of gimmick to get you to buy a record - it is the art form ... and we're just getting started. Hope you enjoy the ride."

Letters to the Editor: Crowdsourcing to Victory The Escapist Staff 0 Comments

Where to From Here? Chimaera 3 Comments
Comments on