We shuffle in like factory workers on the end of our shift, coming in from the driving rain. Our hats and scarves are drenched; the bar is empty, save a few die-hards braving the grim night. Disaster; the DJ hasn't turned up and the karaoke night that was supposed to bring us all together is a bust. Without him and his machine, it's just a dive.

Twenty minutes later, the remnants of the party are in my lounge room and I am kicking over my furniture, bellowing a demand that nobody "forget the joker," halfway through the break for Motorhead's Ace of Spades. Blood swells and capillaries twist and pop under the strain to hit every pitch at full volume. I am not good at this game, but I am great at this song. No points are awarded for exceeding municipal noise laws through your own body, but nobody will get the ringing out of their ears. Tonight I am Lemmy. Tonight I am George Michael. Tonight I am Rihanna. For three brilliant minutes at a time, I am Citizen SingStar. 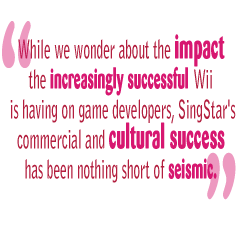 While we wonder about the impact the increasingly successful Wii is having on game developers, SingStar's commercial and cultural success has been nothing short of seismic. For many, the PS2 is "the SingStar machine," especially in Europe and Australasia. Anybody who tells you it's not a real game is a liar and possibly a Communist - it just rewards bravery over everything else. They are jealous because they can't sing. They will tell you they prefer games with good graphics and gameplay. You just have to tell them your voice causes self-shadowing of a different kind and you can croon "Wicked Game" perfectly.

On the verge of the PS3's SingStar release, it's worth taking stock of the phenomenon and tracing the aftershocks that have left some of us scrambling for the microphones every time we see a music video.

The Empty Orchestra
Commonly attributed to Japanese drummer Daisuke Inoue's inventions in the early 1970s, karaoke (literally meaning "the empty or void orchestra") was his term for a singalong device that played his own songs for a ¥100 coin. But Inoue's invention wasn't the first of its kind; technology had already begun to intersect with club culture a few years before hand. During the late '60s and early '70s, popular house bands in Germany and France would have nights without singers in which audience members could stand in to sing the classics - eventually creating lyric sheets with simple notation to help the brave souls navigate the thorny realms of actual sheet music. However, it was Inoue's machines that deserve the bulk of the credit; leveraging the Japanese adoration for ritual embarrassment was natural enough, but his decision to move from classic songs and his own recordings to more popular music is what made karaoke a household name. Unfortunately for Inoue, though, he failed to patent his device, and the profits from karaoke machines now flow to a number of enterprising types in the Philippines, Korea and the United States.