When an industry is as big as videogames, a whole host of supporting organizations grows up around it. Some of these are regulatory, many are specifically technology oriented, and some, like the International Game Developers Association, exist in support of the individuals who work in the business.

The IGDA exists in a tenuous space, relying on the industry for its bread and butter, but also looking out for its greater well-being. An almost entirely volunteer-driven organization, it exists in service to game developers, but with hard-won knowledge that immediate temptations aren't always good for the long haul. I spoke with two guys positioned to know that better than anyone: Ernest Adams, independent game designer and founder of the IGDA; and Jason Della Rocca, first Program Director of the organization in 2000, now Executive Director since 2003.

"I got into the game industry in 1989, after seven years as a software engineer in a Silicon Valley company that made CAD tools for the electronics industry," Adams says. "What I found rather shocked me. The game industry was positively backward in many respects. Proper software engineering techniques, such as technical documentation, revision control and maintainable code were sneered at as ivory-tower wastes of time. Nobody used e-mail or seemed to have heard of the arpanet. (The internet was only just beginning to be wired up.) Many games were still written in assembly language. Furthermore, there was no concept of a professional society or any other formal association. I was amazed by this, as I had been a member of the Association for Computing Machinery for some years. 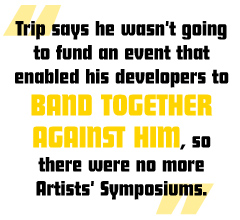 "You can't understand the founding of the IGDA without knowing about the CGDC and its role. A couple of years after Electronic Arts was founded, Trip Hawkins invited all EA's developers ... to a two-day event called the Artists' Symposium. This was a big success and the first time that any developers had come together in a group, pretty much anywhere. I believe they held two of them. However, eventually the developers began comparing notes on their contracts and royalty rates, and those who were getting less than others began to object. Trip says he wasn't going to fund an event that enabled his developers to band together against him, so there were no more Artists' Symposiums. ... So Chris Crawford (who was one of the EA artists) invited 15 people to get together for a day in his own home. 26 people showed up, and it was so successful that he decided to set up a company and put on a proper conference in a hotel. That was in 1988 and was the founding of the Computer Game Developers' Conference.

"When I joined the CGDC board in 1991 ... all of the other members at the time were developers with several years' experience who were used to this. I was a sort of Johnny-come-lately, with these rather peculiar ideas. However, none of that really mattered until the Congressional investigations that started up after Mortal Kombat came out. At that point it became clear to me that the game development community needed a voice."

One Voice
As the proliferation of videogame legislation has increased in the last five years, this sounded an awful lot like what the industry is facing today. Adams says, in its infancy, the early IGDA couldn't do much for those first congressional hearings, but broader, further-reaching changes had already begun: Game developers would have an official professional organization.