On a Tuesday afternoon I presented myself to the doorman at the most exclusive gentleman's club in town. I was ushered into a large, wood-paneled room off the main hallway. Mr. K sat reclining in an armchair that looked older than my grandmother and more expensive than my car.

"Please sit down," he said, offering me the armchair opposite him. It almost swallowed me as I sat down. On the carved walnut table between us was a chessboard, set up and ready for battle.

He ordered a bottle of mineral water and two glasses, and when the waiter closed the door behind him, we sat looking at each other.

"Are you here today on behalf of your employer?" he asked, after a pause that seemed like minutes.
"Well Mr. K," I replied, "you know who my employer is and what he's looking for, but today, I'm here for a game of chess."
"As you like." He smiled and picked up two pawns from the table. The waiter returned with our water, and I nodded toward Mr. K's left hand as I took a sip. He opened it and revealed a white pawn. I had first move.
"Ah, the Queen's Gambit," he said, then made his move.
"Ah, the Baltic Defense." The atmosphere in the room changed, as he realized I knew what I was doing.

The New Job
My company had been around for ages, and while it'd never really become the industry leader, a lot of people in the telecommunications business watched us closely. To combat the glitz and glamour of our competitors' over-hyped offerings, my employer opted instead to provide the best customer service in the industry, and while it was expensive, it worked. 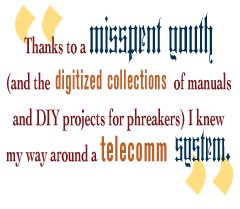 I was 19 when they hired me. I had no degree and very little experience, but thanks to a misspent youth (and the digitized collections of manuals and DIY projects for phreakers) I knew my way around a telecomm system.

I loved my new job. The people were nice, the pay was great and I had lots of cool toys to play with. Instead of tapping away at SimCity, I was building and refining real systems and infrastructure that affected how thousands of real people went about their daily business. Better yet, the stakes were higher, which gave me all the more reason to play the best game I could. When the Operations Manager retired after a few years, I took his office.

The Party
I first saw Mr. K at a trade show. My colleague pointed him out to me. He said he was a man who was hard to get hold of and even harder to talk to. He was also a potential investor for our new project. At the after-show cocktail party, I found myself standing next to him at the bar. He was waiting for a martini.

"Good show this year, isn't it?" I asked.
"Yes, there are a few interesting things here," he said.
I introduced myself.
"Oh, yes," he said. "I believe your people are shopping that new thing around at the moment. Sounds interesting, good luck with it."

On the Ball: Man Versus Machine Jordan Deam 68 Comments