Though you might not know it from looking at TV ratings, America's favorite pastime is thriving like never before. According to Forbes, Major League Baseball's 30 franchises posted profits of $496 million in 2006. The average franchise value rose to $431 million, representing an average 1-year growth of 14.7 percent. Meanwhile, fans turned out to stadiums around the country to the tune of 76 million last season, a record that will be bested in 2007.

Surveying the gaming landscape, you would have no idea that baseball has enjoyed such resurgence. In 2006, Madden NFL 07 moved roughly 6.5 million copies on all platforms to take the No. 1 slot in overall game sales. According to the gaming industry website Next Generation, the best selling baseball game of 2006, Take-Two's Major League Baseball 2K6, placed a paltry 23rd in total sales across all platforms. Not only did it lose to Madden, it lost to three other EA Sports games: NCAA Football 2007, Fight Night Round 3 and NBA Live 07. 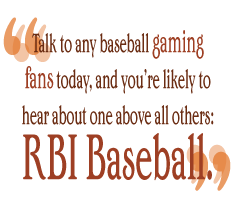 It wasn't always this way for baseball. As far back as the early 1980s, baseball games thrived on the Atari 2600 and Intellivision. Their popularity only grew with the appearance of the NES. Nintendo's eponymous Baseball remains one of the NES' strongest sellers and was one of the earliest sports games made available on the Wii's Virtual Console. The sheer number of baseball games on the NES serves as a testament to their popularity. If you didn't own Baseball, chances were you played your fair share of LJN's Major League Baseball, SNK's Baseball Stars, Jaleco's Bases Loaded or Tecmo Baseball. They were all hot properties in their time, but talk to any baseball gaming fans today, and you're likely to hear about one above all others: RBI Baseball.

Jeff Passan, a national baseball writer at Yahoo! Sports, has all but given up videogames, opting to use his free time to prepare for the impending birth of his first child. But even his wife allows him to make time for an old NES and RBI Baseball.

"It's nice to see blades of grass whirring in the wind, and it's nice to see [an in-game player] that's taken from a bodysuit that has little nodes attached to it," Passan tells me, describing his experience with some of the newer baseball games. Sill, he has a soft spot for Tengen's classic. "The idea that every guy was a little fat guy that looked like a weevil, and you could hit a homerun that went off the screen, and the fireworks exploded. There are so many little things to RBI Baseball that make it great. There's just a fondness."

Like Passan, Mike Beales holds a special place in his gaming library for RBI Baseball. His love is one that has turned a $40 high school wager into a national competition with prize money totaling over $1,500. Called the RBI Baseball Championship of the Universe Tournament, or COTUT, Beales and his friends have hosted this bi-annual tournament in the Chicago area four times since 2000, and the fifth instantiation is scheduled for June of 2008.

Mahalo: MLB 12 The Show: How To Make The Most of the Worst Teams Mahalo 7 Comments