Looks can be deceiving. 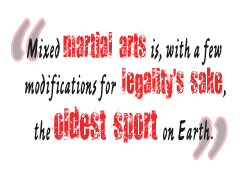 Ever watch a cage fight? It's a pretty brutal affair by any sporting standards. Two combatants step into an octagonal ring surrounded by chain-link fence, wait for the referee's nod, pound fists and proceed to beat each other down with any combination of punches, kicks, knees, elbows, throws, slams, chokes and submission holds until the clock stops or someone's unable to continue the fight. Forget the abstracted violence of NFL football, the blatant pandering and showmanship of pro "wrestling," or the comparatively gentlemanly hands-only, above-the-belt restrictions of pro boxing. Mixed martial arts ("MMA" for short; practitioners shy away from calling it "ultimate fighting") is, with a few modifications for legality's sake, the oldest sport on Earth.

To the untrained eye, it looks gratuitous and barbaric, as though the promoters had simply swept the dregs of the local bars into a ring, to beat each other for the pleasure of the crowds. However, no amount of blood - or "bloodsport" advertising - can obscure the elegant depth of the game, once you know where to look. Contrary to popular belief, cage fighting is indeed a thinking man's game, one no fighting game - not Street Fighter, not Tekken, and certainly not the dreaded Ultimate Fighting Championship: Tapout and Sudden Impact series - has adequately captured.

Mixed martial arts is the latest in a long history of combat sports that trace back as far as the ancient Greeks' "pankration" contests. Likewise, when it comes to individual fighting systems, virtually every civilization out there has had its own history of striking and grappling arts - American boxing, Muay Thai kickboxing, Russian sambo, Japanese judo and karate, and so on. MMA in its most popular current incarnation, the Ultimate Fighting Championship, started as a tournament to "determine the strongest martial art," inspired by the vale tudo ("anything goes") fights that started in early 20th-century Brazil. When 170-pound Royce Gracie won the tournament three out of the first four it was held by submitting much larger fighters, however, it began to look more like an infomercial for Brazilian jiu jitsu, a system of ground-fighting and submission holds that is now a staple inside the octagon.

Under its current management, however, the UFC looks less like a bloodsport and more like, well, an actual sport. There are - though it might not look like it, at first - rules to follow: no eye gouging, small joint manipulation (breaking fingers and toes), pulling hair, biting, head-butting or groin strikes, among other things. In general, the competitors are allowed to punch, kick, knee and elbow each other; slam each other around; and choke or attack an opponent's various joints - the elbow, shoulder, knee, and ankle, usually - with a particular set of submission holds designed to allow the opponent to voluntarily surrender before losing permanent use of something vital. Once a fighter voluntarily submits (by "tapping out") or forces the referee to intervene because he is no longer "intelligently defending" himself, the fight is over. Which is, for most people, more than enough.