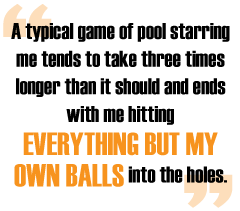 A Big Stick
I know that I'm a lousy pool player. I've been playing most of my life (mainly in bars) but I suck at it. I understand the math involved and can usually tell which ball I need to hit and where, but translating that knowledge to actions is a bit problematic. A typical game of pool starring me tends to take three times longer than it should and ends with me hitting everything but my own balls into the holes, and occasionally sending the cue ball flying across the room.

This is why I love video pool. In a game, the computer does all the work of performing the physical actions, leaving me free to be the idea man of the operation. I'm a significantly better pool player on the sofa, therefore, than at the bar.

For the pool portion of this experiment, I played two pool games, the 9-Ball game included in Wii Play and South Peak's Pool Party. Physics and graphics-wise, the two games are on par (although Pool Party features more realistic models and scenery), but control-wise, there's a wide disparity.

As with all of Nintendo's Wii showcase games, Wii Play's 9-Ball controls very well. The interface is intuitive and clean, which leaves me nothing but my own inadequacy to blame for the fact that I completely suck at it. Pool Party, thankfully, is a piece of shit, so there's plenty of blame to go around there. But in both cases, my personal failure as a pool player wasn't the only obstacle.

Nintendo would have you believe that the versatile remote is capable of performing as well as any variety of sports tool in almost any circumstance. Unfortunately, in practice, the device does a fairly poor job of pretending to be a pool cue.

In both pool games, you hit the ball by pulling the remote backward, away from the TV, and then sliding it forward, just like you would a real pool cue. And yet in both games, the Wii only figured out that I had done so about 75 percent of the time. The rest, I had to repeat the gesture once or twice to convince the game I'd done something, and more often than not, this caused the cue to fly forward either in the wrong direction or with the wrong amount of force.

Pool Party increases the difficulty by forcing you to play a little mini game to choose the force of your stroke, but the combination of button presses and hair-trigger Wiimote pointing acumen required to pull this off was so unnatural - and so impossible for me to master - that I gave up on it and hit the ball with the same amount of superhuman force each time, inevitably ricocheting balls every which way except into the damn pockets.