A Stick and a Ball
There's a trophy somewhere in my mother's house with my name on it. Atop the marble base is a small pillar, and atop that is a gold-colored figurine of a person holding a baseball bat. I earned that trophy when I was around 10 years old. It signifies my baseball team (The Phillies) came in last place.

I remember getting hit in the face with a ball one time when I stepped up to the plate, but memories of actually hitting or catching one have somehow fled my mind. Perhaps they were never there. The Bigs, therefore, was my chance at redemption. I know baseball is a simple game in theory (throw the ball, hit the ball, catch the ball), so I was eager to see if my increased life experience, leveraged by the power of the Wii, would make me a better ballplayer. I started the game up, selected the "play now" option, chose to play as the Texas Rangers at home against the Giants and quickly found myself standing at the pitcher's mound. 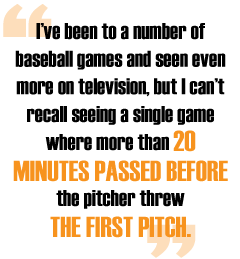 I've been to a number of baseball games and seen even more on television, but I can't recall seeing a single game where more than 20 minutes passed before the pitcher threw the first pitch. As far as I know, it's never happened. Perhaps that's because the act of throwing a ball is so relatively simple, that even if you aren't all that skilled in the vagaries of "strike zones" and "sliders," you can at least reach your arm back, propel it forward and release the damn ball. The Bigs would have you believe otherwise.

After almost 30 minutes of poking random buttons on the remote, flinging it around in my hand as if it were a live vibrator on overdrive and then staring at it like it was the 2001 obelisk and I was early man, I discovered that pitching is hard. To pitch the ball requires a sequence of button presses and twisting motions followed by what's almost (but not quite) a natural pitching motion. The idea is to select the type of pitch you want to throw (with button presses and twisting motions), point the cursor to the area of the plate where you want the ball to go and then let 'er rip while pressing and releasing buttons and moving the Wiimote forward. In theory, this is killer. In practice, it makes me want to curl up and die.

While I'll grant you that the attempt to simulate the dexterity hurdles a MLB pitcher must go through to throw a changeup, for example, is honorable, we're still talking about an oblong stick here, not a baseball, and so introducing any complexity beyond requiring a generic throwing motion is simply that: adding complexity.

By the bottom of the first inning, my Rangers were down 13 runs and had changed pitchers five times. On occasion I'd throw a pitch that wasn't an automatic home run for my opponent, and would then be forced to attempt to field the ball. By run 8 or 9 I'd taken to manually switching to whichever player wasn't in the path of the ball, and then praying I could fade into the outfield and pretend the sun was in my eyes. In this way the game was very much like my limited experience playing actual baseball.

Needless to say, I was excited to step up to the plate - I shouldn't have been. If The Bigs' pitching system was torture, the batting system was downright medieval. I occupied the pitchers' mound for just over half an hour; I was at the plate for less than a minute.

With most baseball videogames, hitting a ball is as simple as pressing a button. In an attempt to introduce the added dimension of actually swinging the bat, The Bigs also opens the door for the added complexity of actually having to hit the ball with it, something I'm simply not able to do - in my living room or on the diamond. Three came up, three went down, and it was my turn to pitch again. I almost cried.

If the idea behind the Wii is to make video sports more accessible and more like their real life counterparts, The Bigs is a colossal failure. I'm sure there's a great baseball videogame in there somewhere, but it's not pick-up-and-play, and even a video baseball pro would need to go back to spring training to learn the new rules of play.

Round three: Neither. Watching the game with a beer is still the best way to enjoy baseball.