A Stick and a Ball Part Two
And then there's Tiger Woods PGA Tour 2007.

Before playing Tiger Woods, My experience with the game of golf was limited to a few weeks basic training in middle school gym class, whacking yellowed golf balls from one end of the bumpy side lot to another with clubs older than my grandfather's car, and a conversation or two with fathers of girlfriends, during which I pretended to understand the meaning of such terms as "handicap" and "tee." I didn't really expect to have any fun playing Tiger Woods, but I'm a journalist and a professional. I figured I'd muddle through the experience and drink off my misery afterward. Once again, I was wrong.

Tiger Woods is easily the most fun sports game I played during this experiment, and the one most likely to satisfy the market for real sports simulations. Granted, the motions required of the remote to simulate golf are relatively simple, and well within the capabilities of the device, but the power of the game can't be laid at the feet of mechanics alone. 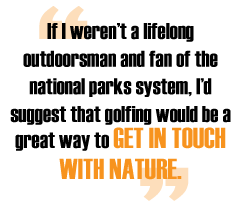 For starters, it's beautiful. The quick start campaign takes the player through 18 holes at golf clubs from around the world, and the Wii does an admirable job of presenting realistic-looking photo vistas of these fabulous expanses of manicured landscaping. If I weren't a lifelong outdoorsman and fan of the national parks system, I'd suggest that golfing would be a great way to get in touch with nature. But I know better, and considering some national parks cost less than $10 to get into versus whatever ungodly amount of money is required to even drive near a golf course, if we're talking about getting close to nature, the better bet is still the national park.

But for standing in your living room, swinging a remote in a graceful arc and watching a tiny ball soar through the air and plunk gently on the fairway while the crowd cheers your every move, Tiger Woods is just the thing.

I enjoyed this game immensely, and I was good at it. Sure, I was playing on easy, and sure, Tiger Woods is like Superman as far as game stats go (it is his game after all), but I ripped it up, coming in under par my very first go-round, and significantly under each time after that. I felt like Babe Ruth, pointing to a spot on the green then slamming the ball down the fairway. Then, after a few turns playing Tiger, I switched to Annika Sorenstam for the obvious reasons, which was even more fun. (You can even change her outfit. You know ... if you're into that.)

Since I have no skill and practically no experience actually playing real golf, I tended to avoid outright mimicking the motions required of the sport, and just swung one arm back and forth to simulate swinging the club. This gave me a lot more accuracy and helped me avoid those pesky slices. I wonder why more golfers don't do this.

Round four: Wii by a mile.

Sudden Death
On the whole, I'd consider the experiment a success. I discovered a few games I'll never play again, a few I'll bring out at parties and one I'm going to play obsessively (and probably secretly) for many months to come.

Unfortunately none of the games, whether more or less fun than their real-life counterparts, are actually a substitute for the real thing, nor do the experiences offer the depth and strategic complexity of the various "traditional" sports videogames. Overall, I'd say the promise of the Wii is just that, and like all promises, is probably better left untested.

Russ Pitts is an Associate Editor for The Escapist. His blog can be found at www.falsegravity.com.