Sports are hard. This shouldn't be news to anyone with a lifelong gaming fetish, nor was it news to me. I hate sports. I can't play most of them, and those I can play usually involve more time away from the house than with which I am comfortable. So, when it comes to sports, I tend to abstain.

I played football for a brief time as a child (in Texas, it's almost a requirement - like military training in Israel); played some soccer and baseball and whiffle ball in elementary school; basketball, dodgeball, tennis and golf in middle school gym class; and as an adult played pool and threw darts in various bars and once bowled in a league. In all cases, I sucked ass.

Yet Nintendo's introduction of the Wii promised a revolutionary control scheme allowing easy, user-friendly simulations of practically all manner of sports on a home videogame console, requiring little more than a swing or shake of the remote to replicate practically any actual sport or game under the sun. This was what we call "A Big Promise." 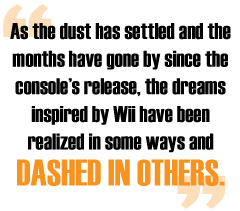 Naturally, as the dust has settled and the months have gone by since the console's release, the dreams inspired by Wii have been realized in some ways and dashed in others. I wanted to test the post-honeymoon phase waters and see if Wii was really all that, as they say. I wanted to see if a lifetime of sports avoidance had rendered me completely unable to enjoy the experience of Wii, or if, like the advertising claims, playing games on the Wii is so much fun, you might not realize you're actually getting exercise.

Big Balls
For this experiment, I played every sports game for Wii I could get my hands on. These included: Wii Sports, Wii Play, Pool Party, The Bigs and Tiger Woods PGA Tour 2007.

Wii Sports fared the best overall, in terms of fun and simulation, which was no real surprise. The bowling game, while completely failing to capture the odor of despair at the local bowlatorium, does manage to effectively simulate the throwing motions, and aside from being a cheating rat bastard half the time, copies the real-world physics fairly well.

After playing Wii Bowling a bit, I decided to actually go to the bowling alley and throw some balls. I hadn't done this in years (I owned my own ball once) and I was immediately disheartened by the experience.

For starters, I'd forgotten that most bowling alleys are in the absolute worst parts of town imaginable, and that all of them smell like ass. Second, having given my bowling ball away some years ago, I discovered what many a bowler before me probably already knew: House balls suck.

I couldn't find a ball that fit my hands properly; all of them felt too heavy. And somebody was being a little too free with the lane grease that day, as within a frame or two my ball was practically dripping with oil and almost impossible to touch without causing a gag reflex. What was worse, I sucked.

Wii Bowling hits the golden nail square on the head: It's easier than actually bowling, and enough like it that it feels like a satisfactory substitute. Plus, you can play without getting grease all over your clothes.