Where some companies' About Us page contains a mealy-mouthed forward-looking vision statement about moving forward new paradigms, independent developer Running With Scissors' About Us page straightforwardly proclaims they are the "notorious video game developers despised by Senator Lieberman, the United States Post Office, and the Australian legislature (to name but three), for daring to produce the tasteless and insensitive videogames Postal and Postal 2."

In the Postal games, it's possible to do more than merely shoot your enemy. In Postal 2, it's possible to beat them senseless, set them on fire, pee it out, hit them with a shovel, pee on them again, then watch them scream for mercy when you get tired of it and light them on fire again to end it all. That's before you get creative and use a cat-silenced shotgun to spook an elephant, which sends it charging headlong through a marching band full of people, all of whom are running and screaming and on fire, because you thoughtfully tossed a Molotov cocktail on them before taking a potshot at Dumbo. 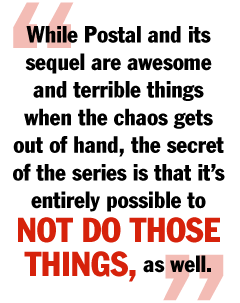 While Postal and its sequel are awesome and terrible things when the chaos gets out of hand, the secret of the series is that it's entirely possible to not do those things, as well. Postal 2 may let you drive your flaming enemies before you with your penis hanging out, but it also lets you wait patiently in line like everyone else, walk the streets and wander aimlessly around town, and complete missions without firing a shot. You can certainly go in guns blazing and achieve your goals, or you can sneak around the back way and avoid the fight entirely. Even though it's not mentioned among the Holy Grail Sandboxes like Oblivion, Postal 2 is an enjoyable experience in doing your own thing. So what does it say about us that given a free-roaming environment, the first thing we do is start shooting things, setting them on fire and peeing on them? Still, while much ink and airtime has been spent denouncing Running With Scissors, they've seldom had their say. I spoke with Vince Desi, RWS' CEO, about his company and how they see themselves and their games.

His job title may be CEO, but he says their small size means he's involved in many different things. "My main priorities are design and marketing, he says. "[RWS] is really a very different kind of company. We're a lot more like a club than a business entity." They started a decade ago, he says, "because we were bored making educational games. The size of the company has changed from project to project. We were less than 10 when we made the original Postal. Now, including everyone, we have over 20 folks contributing to Postal III," and many on the team are former players who were prominent in the community for their mod-making or other skills. "As a 'club,' we have some members who are current, some inactive, and some volunteer. Like I said, we're very different from your typical videogame company. As for culture, the age range of our team is pretty wide, so we have a good cross-culture, but the one consistent theme is fun. We like to have fun and we make fun of everyone and anything in our games, including ourselves." He says the work environment in the company is very friendly, more so than it would be in a big company, and describes the group as, "very independent, and at the same time, we all work well together. It's something that has to be when you're a small, self-funded group."

Letters to the Editor: Making Their Mark The Escapist Staff 0 Comments
Comments on