Once they've gotten their reaction, RWS seems to enjoy themselves tremendously. Calling down the sound and fury of a senator would send most companies scuttling for a rock to hide under. Running With Scissors brags about it on their website. I asked if it was as simple as any publicity being good publicity, or if they were trying to make a point. "Publicity is only good when you have a positive spin," he answered. "Personally, we love satire. We're big fans of South Park, The Simpsons and classic pop culture. For us, videogames [are] a form of artistic expression, not only visually, but as creators, writers and designers. How else can you react to the stupidity of politicians and other pseudo-celebrities or superstars, but to make fun of them?" 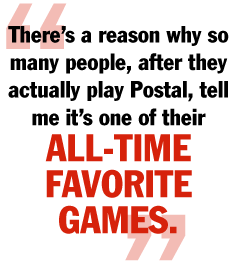 Desi suggests anyone seeking insight into the world of Postal should play the game, "[and] play with an open mind and see how strong the AI is in our games, watch how characters react in our game to different situations. It's a lot more fun than trying to predict how or which group will be offended by a certain feature."

A question about their partnership with Uwe Boll - "I would never partner with anyone if I didn't support them, just like I don't go to dinner with people I don't like" - highlights his respect for people who march to the beat of a different drum. "He's independent and does what he wants. He's a lot like us. If we were in this for the money, then we would have made Doom 48, Unreal 57, Halo 99. You get the picture. We don't make games for the mainstream, yet they really are very mainstream, if you ever truly play them. I'm proud to be different. There's a reason why so many people, after they actually play Postal, tell me it's one of their all-time favorite games."

While a lot of developers crave artistic or mainstream respectability, Desi says he's happy where he's at. "Life is not fair. Not everyone can be a Trump or a Paris, nor should they be. I'm very happy, personally, with who I am and who RWS is. I wouldn't trade places with anyone. For me, being honest is the most important thing in the world. It really is the ultimate freedom. Quite frankly, I don't give a shit what politicians or other hypocrites think, that's their problem."

Shannon Drake is a former Contributing Editor to The Escapist. He now rides a polar bear to work.

Letters to the Editor: Making Their Mark The Escapist Staff 0 Comments