It wasn't always this easy to be a Mac gamer.

Sure, things may look relatively peachy now. Macs are everywhere these days. They practically breed in coffee shops across the country, and the switch to Intel processors, supported with software like Apple's Boot Camp, allows the would-be Mac gamer access to a tremendous library of games, all for the price of an iMac. Maybe it's a little more expensive to put together a decent Mac gaming rig than a budget PC, but there's a premium on sexy these days, and computers are no exception. 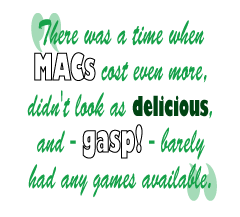 What recent initiates to the world of Apple may not know is that there was a time when Macs cost even more, didn't look as delicious, and - gasp! - barely had any games available. Yes, "gaming" and "Macintosh" were popularly seen as antonyms for the longest time, perhaps one step above the Commodore 64 zealots in terms of popular recognition. The Mac was too obscure, developers said, too difficult to learn how to develop for, too underpowered, too expensive, and only by the efforts of a few overworked and underpaid software porting houses did even the biggest AAA games make their way to the Mac, though sometimes years after their initial PC release. But the Mac had a reputation for attracting "creative types" even then, and some of them did what creative types do best: create.

There have been a few success stories from the people who made it out of the Mac ghetto: Bungie Studios broke into the rest of the gaming industry with Halo for the Xbox, but their roots were in the Mac-centered Marathon series of yore. But there are also a handful of people who chose to stay and keep doing the work they've been doing, and out of all of the independent developers who made their living on the Mac, none is quite so legendary as Ambrosia Software.

The creation myth of Ambrosia Software starts in the early '90s with a hobbyist programmer named Andrew Welch, a budding photojournalism major at the Rochester Institute of Technology, who decided to tinker with the formula for the classic arcade game Asteroids and make it something special. The fruits of his labor would be later known as Maelstrom, which took the core rock-blasting gameplay of Asteroids and added snazzy sprites, upgradeable weapons, score multipliers, a variety of new baddies to deal with and - perhaps most importantly - a quirky personality that said, "This is a Mac game." Lo and behold, Ambrosia Software was born and our protagonist took up the title of El Presidente.