Even if you don't know Tim Schafer, chances are you've played at least one of his award-winning games - do Psychonauts, Day of the Tentacle or Grim Fandango ring a bell? Schafer, a UC Berkeley grad and LucasArts ex-pat, cut his design teeth on The Secret of Monkey Island, and is considered a luminary in the adventure game field. I was lucky enough to speak with Schafer about his past, his present and his thoughts on the future of the ever-changing gaming landscape.

Starting Your Own Studio
When Schafer left LucasArts in 1999 to found his own studio, DoubleFine, it was not with the whole-hearted gusto you might have expected. "At the time, I did not want to start my own company," Schafer says. "For many years it would come up, people would talk about, 'Hey, we should start our own company,' and I was like, 'I don't want to worry about the bathrooms being clean and worry about if there's paper in the copier,' you know, and here I am doing that now."

So what changed? Schafer says a lot of it had to do with enduring a corporate environment for 10 years. When he started at Lucasarts, the company was all about creativity, but as time went on he felt it begin to drift. "They had lost a lot of creative people at that point," Schafer says, "and I wanted to have control over that and be able to treat my employees the way I wanted to and treat the people on the team the way I wanted to." 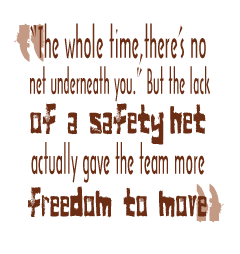 Between his desire to keep good people close to him and the optimism in the late '90s that made it feel like anyone with a little start-up capital and a dream could succeed, DoubleFine was born, though its conception was not easy. "It was quite the rollercoaster," Schafer says. "The whole time, there's no net underneath you." But the lack of a safety net actually gave the team more freedom to move. "At DoubleFine, one of our animators wanted to move to Iceland, and at the old company they would have said 'We're not going to work with him anymore,' but here we can say, 'This guy is a great animator, and we want to keep working with him, so we're going to keep working with him long-distance.' And it's worked out great. And you can just make that call and not need to worry about all the things a big company would need to worry about."

Luck, Schafer admits, also had a great deal of influence on DoubleFine's success. "Around 2000," he says, "a generation of consoles was launching, Microsoft was launching in particular the Xbox, and they were really into buying some success there. They were willing to throw some money around and take some risks to get an early lead."