Sports Interactive doesn't have a great deal of interest in what works for other companies. The company owes its birth to two British brothers and their hobby, and its games are impervious to conventional reviews. In an era where companies spend millions on the latest pixel shaders and 3-D surround sound, SI has built a quiet empire in the text-based sports management genre.

The genre itself disregards convention, too. Despite the fact it's based on sports, you don't play individual games like you would in Madden. A season in a sports management game can be completed in the time it takes your computer to tabulate a record based on the players you've selected. Sports management sims exist on a higher plane of thought, focusing instead on season- and franchise-long strategy as opposed to per-game tactics. You're a general manager - or an owner - signing players and coaches, upgrading your stadium, and jockeying for media coverage.

Sports Interactive is a pioneer in the field. "There was not really a plan for world domination or anything like that - [founders Paul and Oliver Collyer] were just making games because that's what they did," says Miles Jacobson, Managing Director of Sports Interactive. The duo wanted to play a good soccer manager, "so [they] made one themselves for a bit of fun." With the encouragement of their friends, the Collyers sent their project around to various game publishers, and a company called Domark brought it to market. Written in BASIC, the original Championship Manager was released on September 1, 1992.

Sports Interactive the company was formed in 1994 as the brothers released Championship Manager 93-94, which introduced real players and helped establish the sports gaming tradition. "Around 1995 they were persuaded to take on another couple of people by Domark," Jacobson says. "The policy for taking people on was always 'only if we have the money and the need,' as we weren't prepared to borrow any more, or have investment, or even an overdraft facility." They eventually went on to secure a publisher, Eidos, and have since published nine iterations of Championship Manager, carving out a sports management path where few have tread before. 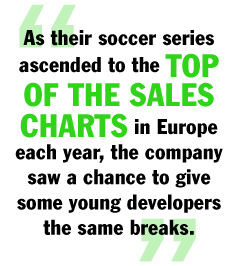 As their soccer series ascended to the top of the sales charts in Europe each year, the company saw a chance to give some young developers the same breaks. First, they brought in Finnish developer Risto "Riz" Remes, who had been at work on Eastside Hockey Manager, a freeware hockey management simulation that was clearly inspired by the Championship Manager series. The first iteration, re-dubbed NHL Eastside Hockey Manager, was released in time for the 2004-2005 NHL season. "There was a lot in Riz that was in [Oliver] and Paul in the early days, so [they] decided to give him a break, and a chance to turn his dream into reality," Jacobson says.

While Canadians rejoiced that the world's top sports management company had spent some money on hockey, it was a decidedly curious move for a company based in London.

Distribution problems, slow sales and piracy plagued the NHL EHM series. Even in Canada, where the game should have been gobbled up, box copies were notoriously hard to spot. The third and final version of the game, released in 2006, didn't even garner a box from publisher Sega. The company cited overwhelming piracy when they ceased development on future iterations of the game in early 2007. "The decision was a complicated one, but it came down to the game just not selling enough units," Jacobson says. "The first one had done really well, the second was blighted by huge amounts of piracy, particularly in Scandinavia."

Letters to the Editor: Making Their Mark The Escapist Staff 0 Comments

Making Money on the Mac Pat M. 1 Comment
Comments on