On September 13, 2005, a disease outbreak claimed the lives of uncounted thousands and rendered a number of cities uninhabitable. The disease was not SARS or Avian Influenza; it was Corrupted Blood, a debuff cast by Hakkar in Zul'Gurub, what was then World of Warcraft's latest instance.

It was supposed to be simple. Over time, Corrupted Blood would do damage to a player while simultaneously passing itself to other characters in close proximity. For a higher-level character (such as those capable of entering the instance and taking on Hakkar) the debuff was little more than an annoyance that tied up healing resources. For lower-level characters, it was downright deadly. What's more, it was never meant to have left the confines of Zul'Gurub, and yet it did. This is where the epidemiologists come in.

When Corrupted Blood ran rampant, its patterns of diffusion resembled those of real-life diseases, and scientists took interest. Not only did the disease spread to other users, but there were carriers who, both knowingly and unknowingly, were able to take the malady across great distances via their infected pets. The parallels between World of Warcraft's plague and potential outbreaks in the real world were so compelling that the CDC requested the simulation data.

But the data from the Corrupted Blood epidemic is only so useful. The face-to-face social interaction that World of Warcraft presents is extremely limited; between guild chats and global channels, there's little reason to come together in actual gatherings. Avatars may bump into each other on the bridge between the auction house and bank in Ironforge, but the main attraction still lies in the remote wilds and dungeons of Azeroth.

An alternative to studying diseases in World of Warcraft would be to look at some of the more "realistic," socially-engaging games, like Second Life, Active Worlds and There. Instead of a heavy focus on combat, these games are more freeform and place an emphasis on user-generated content and social interaction. Worlds like these bear a closer resemblance to our world and are seemingly better candidates for epidemiological research. 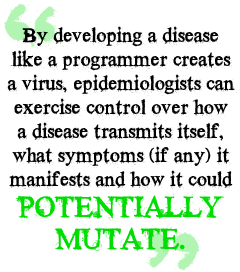 Second Life's scripting language offers epidemiologists the opportunity to personally engineer their own diseases. By developing a disease like a programmer creates a virus, epidemiologists can exercise control over how a disease transmits itself, what symptoms (if any) it manifests and how it could potentially mutate. The real advantage of virtual epidemiology is that these games have a human influence that just can't be simulated by computers. People do illogical and unpredictable things, things that have a strong influence on when and where a disease can be transmitted. However, World of Warcraft trumps everything else on the market in terms of critical mass, and a large population may be a more important criterion of realism than gameplay.

But if researchers really want to create a lasting, believable experiment, they'll need to work with a game's developers. A research team could create a disease in Second Life by itself, but it wouldn't have access to any tracking data Linden Lab may have. Instead, by working with developers, epidemiologists could enjoy more control over a simulation and its initial variables.