Dawn has ushered in the morning birdsong, but Christine O'Reilly is still sitting cross-legged on her bedroom floor in a pink tank top and boxer briefs, talking to her raiding guild in World of Warcraft (WoW) on her homemade PC. They have just completed the Serpentshrine Cavern and defeated Lady Vashj, and the general consensus in the Vent chat is the raid went very well. But as soon as she logs off, her cell phone rings.

It's one of the Warlocks, and he wants to know: "Can we talk about what just happened in there?"

These late-night calls have become routine for O'Reilly, a 24-year-old Notre Dame business school graduate with a decade of experience in MMOG communities. After warming up with Ultima Online and Diablo II, O'Reilly became the only female in two hardcore, male-dominated MMOG guilds: Anarchy Online's Legion and WoW's Exordium, which, at its height, was the fourth-best guild on the Mal'Ganis server. As the only woman in Exordium, O'Reilly says she naturally became the "go-to girl" for disgruntled male players, who are often ridiculed for sharing their feelings with other men. She explains: "If you are emotional or show vulnerability in game, you'll often be called an 'emo fag' and told to 'wipe your pussy' or something to that effect." To avoid this hostility, male players unburden their woes on O'Reilly, who functions as the conduit of communication from guild member to guild master. 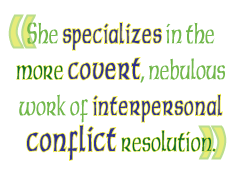 Although O'Reilly has resolved common MMOG disputes, such as who should take loot after a kill or who should take the time to help get new members raid-ready, she specializes in the more covert, nebulous work of interpersonal conflict resolution. When one talented Exordium recruit told her the guild's senior cliques were excluding him from instances, she convinced the guild master to break the cliques apart and encourage the participation of new members. When Exordium's main tank confessed offline that problems in his personal life were affecting his in-game performance, she discreetly asked the others to be kind to him during raids, to prevent an abrupt log-off in an intense instance.

O'Reilly says this interpersonal mediation is crucial: If someone has a bad experience, "they can burn out, get offended, log off and quit - or even sell their characters." Since the departure of a keyed, leveled player can be devastating for tightly-knit guild, O'Reilly tries to keep Exordium's players around by making sure they're satisfied with their gaming experience. "Everyone has a different motivation for playing. Some want to lead, some need competition, some just want to belong. I believe there's a way to make everyone happy and have a very successful guild, so I find out what they want and try to fulfill it. I'm essentially the HR department."

The games-as-business metaphor has become legitimate. Dr. Douglas Thomas, Associate Professor of Communication at the University of Southern California, says virtual worlds presage how we will communicate in our professional and personal futures. And corporations are beginning to note the implications MMOGs have for management: The recent Seriosity and IBM report "Virtual World, Real Leaders: Online games put the future of business leadership on display" suggests that MMOG players can apply the leadership techniques they learn in-game to real-world businesses.

O'Reilly agrees that guilds and offices operate in similar ways. She says WoW guilds, like businesses, have to provide incentives for their team members to stick around, especially once all of the bosses are defeated and players have to wait for Blizzard to release new instances. "Many people don't just care about winning and loot, and after you're done winning, what's left? You need to offer more to keep them around, to keep them happy and moving toward a goal. You have to give them what they want."