I have an addictive personality, and in my 34 years I've submitted to and subsequently conquered tobacco, alcohol and caffeine with much less emotional scarring and social awkwardness than you might expect. My nature is such that if it tickles the happy parts of my brain, then you can be damn sure I will latch onto it like a lamprey with a grudge, and then painfully tear myself off just before I burst. So earlier this year upon realizing I had a new addiction to break, I was less than enthusiastic.

There was no intervention, no moment of truth when the wife said, "It's either me or Azeroth," which, coincidentally, would have been silly, since I spend most of my time in Outland. There was no missed deadline, forgotten kid waiting at the rain-soaked soccer field while I finished up a fruitful Karazhan raid or crucial responsibility traded for a world of AoE farming and power leveling. I simply calculated how much of my life I'd spent in this artificial world.

The staggering tally was just over 1,000 hours, or biblically speaking, 40 days and 40 nights. I shouldn't be surprised. I've lost countless hours to videogaming before, but there was something offensive about losing such a huge chunk of time to a single game. Worse still, I was looking at another 1,000 hours of endgame to keep up with my friends. Futility, thy name is grinding.

So, I vowed to quit, and I would do so in such a melodramatic way that I convinced my editors here at The Escapist that the results would be worth documenting. I wouldn't simply do as so many before me had, click the uninstall button and privately put the whole ordeal behind me.

I would kill my characters. 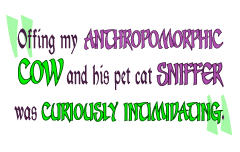 As I made the offer and felt vague panic at the reality of the proposition, I realized offing my anthropomorphic cow and his pet cat Sniffer was curiously intimidating. And it got worse when I thought of what would happen to my rare and epic accoutrements, items for which I had traded countless heartbeats from my personal, finite countdown. Suddenly flashing before my eyes were the 70 levels through which I had groomed my Tauren Hunter, who had plumbed the depths of Molten Core, fought gods in Ahn'Qiraj and crossed the gulf of space to take the fight against the Burning Legion on its own ground.

Had I been too hasty? When my hand was finally poised above the delete key, could I muster the same fortitude that had allowed me to crumple up my last pack of smokes and never touch the stuff again?

I stepped from the safe confines of my office and announced to my wife that I had made the decision to end my World of Warcraft addiction. She seemed more curious than pleased.

Anyone who's ever been really invested in an MMOG might understand how that's a difficult question to answer. The game had become the bedrock of my pastime. I wasn't sure anymore whether I was playing out of a sense of fun or artificial necessity. Ask the alcoholic if he enjoys drinking or the smoker if his cigarettes taste good, and, if he's at that fine precipice between control and chaos, the answer is equal parts yes and no. Maybe it's just inertia that keeps an addict going, the comfort zone in which we operate in familiar terms with familiar people. So I dodged the question and pointed out that it would give me more time to spend with her and our son.

"Honey, you do whatever you want," she said. That's not as passive-aggressive as it sounds. That's just my wife's way of saying, "That's nice of you to say, but you'll probably just play a different game, and that's OK."