If asked to identify the best four years of their lives, very few people would mention high school. But ask them which period is the most memorable, and they'll likely look back on their mid to late teens, regardless of how much fun they were, and the thought of going back is oddly compelling. Perhaps we wish we could talk to our younger selves, that our lives would have been better had we known then what we know now. Those of us who do want to go back in time are in luck, thanks to Backbone Entertainment's 2007 dating simulation Brooktown High.

Brooktown High, released by Konami for the PSP, is one of only a handful of dating simulation games released in western territories, and perhaps the first one to be developed entirely by an American team. But despite great success in Japan, dating sims haven't made much of a splash in the West. 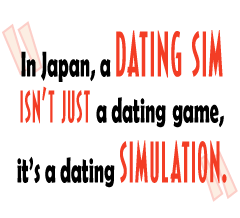 Dating simulations' failure outside of Japan is not so much a failure of content, but a failure of purpose. In Japan, a dating sim isn't just a dating game, it's a dating simulation. Functioning in Japanese society relies largely on understanding and acting appropriately to one's social status. While this can be said of most cultures, in Japan the rules are more complex, and the consequences of breaking them are severe.

Dating sims provide young men an opportunity to explore what Japanese society deems appropriate courtship behavior. A misstep in the dating simulation is easily rectified. Furthermore, since social pressures prescribe the types of appropriate mates so narrowly, the variety of women found in such games, running the gamut from moody bookworms to brash tomboys, allow their audience to vicariously experience dating many different kinds of people, many of whom they're unlikely to encounter in real life. Since Japanese women must play by the same societal rulebook as the men, it reinforces appropriate behavior in them, as well.

Lessons like that can easily be updated to apply to Western audiences. High school dating simulations are already popular in TV; shows like The Hills are guidebooks for high school survival. Brooktown High teaches many of the same lessons MTV does. For students at Brooktown, sex and dating are of paramount importance. Schoolwork, although it consumes a majority of the students' time, occupies only a small fraction of the player's attention. People judge you based on how you're dressed, regardless of what you're capable of. There's no relationship that can't be salvaged with the strategic application of expensive gifts. Homosexuality, while acceptable for some females, isn't an acceptable choice for males, and it isn't an acceptable lifestyle for you. If you graduate from Brooktown, you learn that your behavior in high school dictates not just your scholastic experience, but your entire future. Your grades determine your career, you marry your prom date and the rest of your life is compressed into a sparse paragraph.

But American culture is more than just MTV. Despite differences in wealth, race and personal interests, Brooktown's society is almost completely egalitarian. Students in different social groups interact freely, and there's little indication of a social hierarchy beyond what the player brings with him. This social equality is accompanied by a similar overarching social mobility. The player is even forced to interact with students outside his social group. Success comes easier to a well-rounded individual than one who follows a single path obsessively, and success is unobtainable without some good old-fashioned hard work.

It's easy to find meaning where none exists, and it's possible that dating simulations are simply games. However, it's equally true that everything we do contributes something to the people we become. To say all games are necessarily educational is too glib. But to think games only teach when we intend them to is shortsighted and dangerous. All popular culture we consume is a way of telling stories about what we are and what we'd like to be. And children, of any age, will always learn from the stories we tell them.

Letters to the Editor: Social Studies The Escapist Staff 0 Comments