It's not often that you get to see a small child dragged out of an art gallery. To be sure, it's rare to see anyone without an art degree (or a date with someone with an art degree) so attached to an art exhibition they refuse to leave. But not all galleries are created equal. 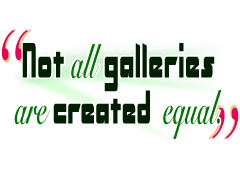 This particular gallery - the Games Lab - is a component of the larger institution called the Australian Centre for the Moving Image (ACMI), itself situated within the jigsaw architecture of Melbourne's Federation Square. I've come to the Centre to meet its curator, Helen Stuckey. "It's a space," she says, "that was conceived in recognition that as we enter the 21st century, computer and videogames are the most compelling form of screen culture."

The square's wedge-like buildings sit next to St. Paul's Cathedral on one side and the sprawling yellow bulk of Flinders Street Station on another, much like uncomfortably matched strangers sharing the same seat of one of the city's signature trams. Melbourne's a young, strange city that can be somewhat scattered in its progressive attitude. The eight-hour workday was won here, when stonemasons walked off the job in 1856, but a scandal erupted when Jean Shrimpton wore a proto-miniskirt to the 1965 Derby Day.

In the Games Lab, too, the latest thing meets the oldest: videogames and art. A lot of debate goes on about whether or not games are art, but it's rarely acknowledged in such engagements that both games and art present rather fast-moving targets. Film critic Roger Ebert, for example, opines that games can't be art because they give players choices, whereas a film guides the audience through a story and toward meaning. But by this logic, cathedrals aren't art either. Or anything with an architectural or sculptural element to the experience, an element you navigate. The facades of Federation Square are themselves eminently navigable, a crosshatch of patterns that mess with the familiar rules of linear perspective. It would make a great FPS level.

And indeed it has. Stuckey describes one of the Centre's first exhibits: acmipark, a multiplayer game recreated the architecture of Federation Square. "acmipark was a game world with no competitive elements: a virtual ACMI, which can be accessed both locally and globally. Designed as a sound park, it was a musical instrument which can be played collectively, and, like Federation Square itself, it was envisaged as a kind of public space waiting for a community to define its meaning." Forget cyberpunk - this is the real virtual thing. In most galleries, the space is made to exhibit the works. But with acmipark, the work exhibits the space.

Experiment and Exhibit
What does it mean, exactly, to exhibit a videogame? Most people encounter games in a domestic setting or, slightly archaically, the commercial space of an arcade. The Games Lab, in some ways, brings together the community-oriented space of a public institution with the urge to find a console of your own.

This merge was foremost in Games Lab's design and origin. The space, which opened in early 2005 with a speech by Uruguayan videogame scholar and designer Gonzalo Frasca, responds to ACMI's innovative brief. "ACMI sees its role as quite traditional in terms of promoting screen literacy," says Stuckey. "Today, screen culture defines who we are, what we do and how we imagine our future. Videogames help develop skills necessary for living in the digital age."

The Games Lab itself is bathed in dim lighting, regularly punctuated by the glowing screen of a workstation running a game. Squarish tables and cube-like seats focus attention on the games rather than the furnishings. Projectors loop game footage on the walls - either a Games Lab reel showing clips from Red vs. Blue and the upcoming Metal Gear Solid title, or gameplay from one of the visitors. People are either engrossed in a game, with headphones on, oblivious to the world around them, or they cluster in small groups around individual screens, happily backseat gaming. "The space is designed so the causal visitors can view all the playable games as game capture, and many of the games are projected so play is more performative and the scale more spectacular."