The serious games field is rife with misconceptions because it encompasses so much. To help spread the truth about serious games, let's debunk 10 of the biggest myths about the genre.

The Game Industry Doesn't Work On Serious Games
New fields always over-emphasize startups. The casual and mobile game sectors are still peppered with new companies. Serious games are no different, but the genre isn't bereft of major industry players. Obviously, games like Brain Age spring to mind. But beneath the surface, Square-Enix has joined with a leading Japanese textbook publisher to make teaching games, EA has licensed the Madden franchise to a coaching software company, Konami has partnered with West Virginia to rollout a DDR-based exercise program. It's not a very big leap to say every major development shop will have at least one serious game under its belt in the near future.

Serious Games are for Learning and Training
The most notorious myth is the notion that serious games are edutainment repackaged under a different moniker. Nothing could be further from the truth. A rich set of games based on goals other than education, including health-related therapies, exercise, public opinion research and economic studies, have enjoyed success. In fact, making a game that teaches a specific lesson is one of the hardest design goals to accomplish. Serious games that act more like utilities and exist beyond education offer a lot of promise for the field's future. 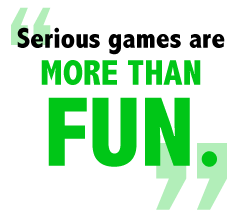 Serious Games Aren't Fun
This is an axiom perpetuated by many developers and non-developers. Talk about needing to reset expectations. Sure, there are times when serious games lack the joy of play that at times disproportionately drives commercial games, but people absorb media for many different reasons, only one of which is for fun. Any number of necessities and other motivational purposes also come into play. To think fun is the only reason users play games isn't giving people much credit. If anything, serious games are more than fun.

Serious Games Are Always Serious
The term "serious" isn't a grammatical modifier related to a serious game's content. What makes a game a serious game is the designers' choice to make their game more than entertaining to the player. For instance, Catch the Sperm, created for the Swiss AIDS Federation, is a public service advergame. Its purpose is to educate people about the need to engage in safe sex practices. This game, which takes place inside a vagina and features gameplay where you shoot condoms at oncoming viruses and sperm, is definitely funny, but the message is serious. Silly game, serious purpose.

Serious Games Aren't Commercially Successful
Earlier in 2007, Bing Gordon, EA's Chief Creative Officer, referring to recent game school graduates said: "About a third want to do games for a public purpose, which leads me to believe that serious games are going to become really important, but the thing is that nobody knows how to monetize them." In fairness to Gordon, he may be specifically referring to a certain sub-section of serious games focused on social issues. Monetizing those games is beyond tough, and in most cases I don't think the author or sponsor's intent is to make money on them.

However, on a broader level, there is a general perception that serious games can't be commercially successful. But the serious games genre makes $100 million annually; small, compared to the global games business, but growing quickly. Several commercial games that look at health issues are already prominent sellers, and studios like High Voltage, Blitz Games and Totally Games are enjoying meaningful revenues in the industry.

Letters to the Editor: Social Studies The Escapist Staff 0 Comments

From the Barrel of a Gun tendo82 42 Comments