If there is one thing every writer knows, it's that good stories are about characters. And every game designer knows that if games are going to be taken seriously - or better yet, praised as "cinematic" - they must have good stories. So, it's a simple matter of deduction: Games should tell stories about characters. And the market seems to get it, because every year games lay on heavier stories with an increasing emphasis on character development.

But in fact, no matter how airtight the logic or lucrative the rewards, the decision to hitch games to character-driven stories is a misguided one that seldom produces respectable stories and even less frequently yields the best thing games can offer: fulfilling and enjoyable gameplay.

The problem is game writers refer to the "player character" as a single entity, when it's in fact a compound creature, like Jekyll and Hyde. And, as the poor doctor discovered, only one can be in control. Either the character is driving the game's narrative or the player is.

Writer's Block
There are inherent obstacles to telling character-driven stories in videogames. Some are technical (like the extraordinary difficulty in animating characters, particularly their faces), some are budgetary (like the cost of good voice acting). Stories about characters rely on subtlety that is very difficult to convey with stiff models and bombastic voice actors. There's also no career path drawing talented writers into the industry, meaning a lot of the writers who do find their way into games have come because they haven't found more traditional success. But that's just the tip of the iceberg. 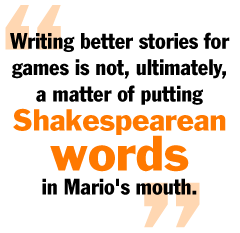 Writing better stories for games is not, ultimately, a matter of putting Shakespearean words in Mario's mouth, because Shakespeare was writing fixed stories for passive audiences. Hamlet wouldn't work as a game, because the player could never be expected to act - or rather, not act - as Hamlet does, and so the player would be forced to behave differently than his personal character.

For a game's story to complement, rather than obstruct, the gameplay, it can't be fixed in advance but must be responsive to the player. While it's relatively easy to make things like exploding barrels or bloodthirsty orcs respond to the player's free choices, it's difficult to make complex psychological characters respond plausibly. To make the characters work in the story, the designer must take away the player's ability to affect them as he likes. Most obviously, characters necessary to the story can't be killed, and this immortality leads to a host of artificial gameplay constraints or narrative leaps.

Reviews: Once Upon a Time Premiere Explores the Devil Inside Dan O'Halloran 8 Comments