"ALL THE TAPES ARE HOPE'S!!!!" Chambers writes. "I almost fell out of my chair when I placed the first tape in the camera. And there she was - Hope was on screen. ... What's strange is that there is footage of someone watching Hope. It's creepy. ... The police don't want me to show anything to anyone especially not online."

Chambers receives a strange, garbled recording of a woman's voice paired with images of some sort of code interspersed with a fleeting glimpse of Hope's face. "I can't make out much in this recording," he writes, "but I'm sure that the voice must be Hope!"

"They're wild times right now in terms of storytelling," says Weiler. "I'm approaching all my work in a new way - I'm creating a world. It's not just enough to create a script anymore." 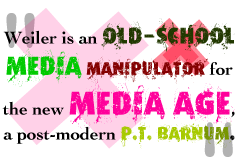 Weiler is an old-school media manipulator for the new media age, a post-modern P.T. Barnum. I've managed to catch half an hour with him on the phone, delayed a week because he was traveling to LA for a "mash-up" screening of Head Trauma. Next week he's off to London. After that it's back to work on the script for his next film ("it's in the horror genre, very visceral - Lord of the Flies meets 28 Days Later") and negotiating a deal for his new television series, which he can't tell me about - yet.

"I kind of have a full plate," he says - the understatement of the year.

"You Don't Have to Play the Game"
Head Trauma was shown on 17 screens across the country last year and released on DVD almost immediately. After that, Weiler took the show on the road, showing the film in front of live audiences with a live band performing the film's score and characters from the film emerging from the audience and calling viewers on their cell phones. Weiler calls it "Horror 2.0."

"I think in some ways horror's become a little bit pat," says Weiler. "You always know when the scares are coming. What I was interested in doing was the idea of taking certain types of pervasive technology and having scares come from all over the place ... taking something that's classically passive and communal and throwing in an element of music, technology and scares.

"In New York, for instance, [audience members] were able to remix media through ispot and unlock clues, and when they were in the theater, the musicians and DJs would rescore the movie live, and characters would come out and scare people and people could use their cell phones to interact with the film. ... But after they left, the movie would follow them home and lead them online. We could call them and text them. ...We had all these different touch points where you could interact with the film - not just a passive screening."