From the full-on screeching audio assault of his former electronic noise-punk group, Atari Teenage Riot, to the varied arrangements of his solo work, German musician Alec Empire is well versed in the power of utilizing the sounds and aesthetic of videogames in his music. For close to two decades, his music and politics have been hard-edged, unforgiving and nothing short of revolutionary.

One of the revolutions he inspired fits in the palm of your hand. Empire was among the earlier artists to adopt what has now become the audio weapon of choice in the digital underground: a Nintendo Game Boy.

"It was obvious to me. When I started Atari Teenage Riot I loved the idea of using a tool which is supposed to be a videogame only. Of course the Atari back then was a proper little computer like Amiga," says Empire.

Made largely possible by a few DIY programmers' effort, a growing number of musicians continue to find ways to incorporate 8-bit sounds into their art.

Perhaps unwittingly, Nintendo laid the groundwork for the coming revolution when it released the Game Boy Camera accessory in 1998. A limited sound sequencing program was built into the device. To access the program users have to play a space shooter game and blast down a particular ship, which unlocks the sequencer.

"When Nintendo released the music program I just had to get it," says Empire. He went on to create a 75-minute double album using the simple three-channel sound program.

We Punk Einheit
Empire recalls having Game Boy "Out" parties in Berlin, back in 1998. DJs were called "body snatchers," and the events featured videogame music interspersed with No Wave and bizarre Japanese art records.

"I was so bored with the British music press praising The Beatles on and on. At those parties we wanted to draw a line once and for all and reject the old tradition of music making, which is still stopping or slowing down the evolution of music," he says. "I grew up in Berlin. The artists in Germany made a fresh start after the Hitler regime. They thought that if a society that evil came out from the art created before it, then we must invent a new way of thinking and creating." 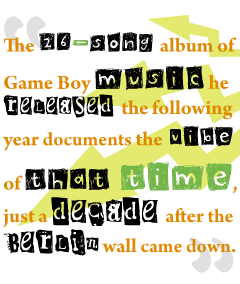 The 26-song album of Game Boy music he released the following year documents the vibe of that time, just a decade after the Berlin wall came down.

Under the moniker Nintendo Teenage Robots, Empire released We Punk Einheit on his label, Digital Hardcore Recordings, in 1999.

Most songs on the album are simultaneously exciting and painful to listen to. The music is mainly looping blips and beeps, merged with digitized blasts from the noise channel. At times the music undulates, almost danceable; other times it degenerates into chaos. Listening to the whole album blasted at high volume feels like having your brain hard-wired into a classic console.

"The feedback that I got from people was 'How on Earth did you come up with that on this little machine?'" says Empire.