Devised at the pace of about a song a day, Empire likens the process of composing songs on the Game Boy to reaching a high level in a videogame. In early arcade games the difficulty often ramps up significantly after the first or second level, making it nearly impossible to proceed without an extreme level of manual dexterity and unflinching concentration. The composition process for the record lent itself more to subconscious intuition and quick finger reflexes rather than preconceived song structures. "Everything goes fast, and you react quickly. It's exciting, thrilling. Your body releases adrenaline. That's how it felt; very similar to how I record music in general." 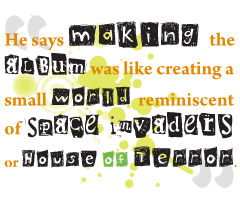 He says making the album was like creating a small world reminiscent of Space Invaders or House of Terror. When he was a kid these were the worlds he dreamed about. "To me these were quite nihilistic games, because you could only lose. The aliens would always take over. I loved that when I was a kid. The music and sounds that came with it were very cold, like an unstoppable machine which destroys you, the player. You can be sure about that when you start the game."

Now You Are Playing With Power
The Game Boy's hardware limitations, along with its lack of composition programs, have become part of the device's allure as a music-making tool. The variety of old-school sounds one can make with it is appealing; never mind that picking up an iconic piece of '90s pop culture and manipulating it, for good or evil, is just plain cool.

In early 1998, German art student Oliver Wittchow gave the first public demonstration of his new program called Nanoloop, a 16-step pattern music sequencer designed for the Game Boy, during a "lo-fi contest" at the Liquid Sky Club in Cologne. "Though [the] sound was really awful, the audience's feedback was very euphoric and I realized I should continue development and release this to the public," Wittchow says of Nanoloop's public debut.

Wittchow began producing a new version of the software the following year and distributed the program by hand to a limited group of people. Nanoloop's minimalist 4x4 interface allows the user to play a pattern of 16 notes in a loop. Notes can be set and edited on the fly, which makes the program popular for live, improvisational performances. Two Game Boys running Nanoloop can be linked together and synced with a cable.

Several versions of the program were released until 2004, when Wittchow's Chinese manufacturer suddenly stopped producing the blank Game Boy cartridges he needed for the program. At the time, cartridges were still in production for the newer Game Boy Advance system, and Wittchow developed a GBA version of Nanoloop (v2.1) as a result. Version 2.1 took advantage of the GBA sound chip with a completely redesigned sound engine.

"Despite the popularity of 2.1, there was a continuous demand for the unique, rough sound of the old Game Boy models and the simplicity of the old Nanoloop versions," he says. In order to meet this demand, Wittchow recently developed his own printed circuit boards for Game Boy Color/Classic cartridges and used them to release a new Nanoloop for the older hardware.