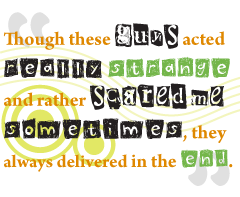 "It was always a certain financial risk because I had to order and pay in advance large quantities from various obscure, unreliable suppliers in Hong Kong," Wittchow says. "However, though these guys acted really strange and rather scared me sometimes, they always delivered in the end."

Little Sound
Swedish musician and programmer Johan Kotlinski created the Game Boy's most versatile music-making program. Operating under the name Role Model, Kotlinski began making electronic music on an Amiga in the mid-'90s. Eventually the Game Boy caught his eye, and Kotlinski set out to program a more robust sound creation program for the system.

"For a long time, I had some ideas about how nice it would be to have some kind of musical notepad to put down ideas on while being away from home. It was mostly a coincidence that I started working on the Game Boy platform," Kotlinski says.

Months of work on a prototype yielded version 1.0 of Little Sound DJ (LSDJ) in January 2001. LSDJ allows users to create their own modulations in 4-bit sound using the Game Boy's two square channels, a waveform channel and a noise channel. Instead of creating sounds in a constant loop, patterns can be arranged and modified in many different ways to create entire songs with the software. And users could save their songs directly onto LSDJ's cartridge.

Much like Wittchow, Kotlinski embraced the do-it-yourself ethic and took to producing the cartridges by hand. He purchased empty cartridges from Hong Kong in small batches and loaded the program onto them himself. Despite high buy-in cost, the project quickly became profitable for Kotlinski. After several years, however, Kotlinski opted to stop producing LSDJ. "It was very time-consuming work, so eventually I felt forced to quit the business for my own good," he says. "Also, it's very hard to find cheap reprogrammable cartridges for the original Game Boy now that new models have arrived."

New users are still finding their way to the program, either by finding reprogrammable cartridges and making their own personal copies or downloading the LSDJ ROM file and using it with computer Game Boy emulators.

Feel the Fist of Game Boy
After first using the Game Boy Camera to generate the chaotic blips in We Punk Einheit, Empire picked up Nanoloop and began incorporating the Game Boy into all of his live solo electronic shows. He uses different generations of Game Boy models, since each produces different sounds and frequencies.

"I have never used other videogame hardware live mainly because the Game Boy sounds really good," says Empire. "I realized how powerful the machine really is when heard over a big PA."

It's easy to call the Game Boy's music a gimmick, but Empire sees the device as an instrument; something to be respected, like a guitar or a piano. He keeps a Game Boy sitting in his studio next to other instruments. I think people should stop treating it as a 'fun' tool and get serious with it."

Nathan Meunier is a freelance contributor to The Escapist.