Escort missions. They're like Take Your Child to Work Day, only your job involves getting shot at and your child is a mental deficient with a lousy sense of direction and giant target painted on his back.

In theory, escort missions are your - as the hero/protagonist of a game - chance to demonstrate your ability to do more than simply kill everything in sight. Sometimes, there really are people who can't defend themselves, yet need to venture forth into dangerous lands, and if you can save a world, you can surely save one person.

Unfortunately, no matter how much story is piled on top of these scenarios, the missions rarely feel like more than a chore, leaving you feeling less like the savior of the universe and more like a hired thug with little else to do but watch other people do more interesting, less violent work; the Blackwater mercenary of the videogame land, escorting pencil pushers to the Green Zone. 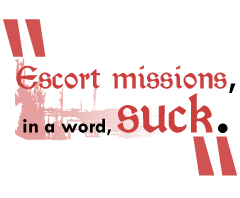 Escort missions, in a word, suck.

"Anyone with more than a few years of videogame experience can summon up a spirited and generally caustic opinion of this game mechanic given half the chance," says Larry Sonntag, a reporter and longtime gamer. He describes his least favorite escort mission, a level from Peter Molyneux's critically acclaimed RPG, Fable, in which the hero is asked to enter a cave filled with monsters to recover a woman's lost child, as "very unsatisfying, even annoying."

Sonntag points to one of the main frustrations with this kind of scenario as he describes his attempt to save the child, and the child's patent refusal to stand in a safe place while being protected.

"Every time I swung the hammer," he says, "I'd both clean out some enemies and give a mighty smack to the young lad. Soon enough, my hammer reduced the boy to a bloody pile at my feet, and I walked across the room to turn off my Xbox."

Sonntag's experience is fairly common. Most players suffer through escort missions (often referring to them as "the dreaded"), unsure of why they're even in the game. Even the designers and writers I spoke with for this article - many of whom have designed escort missions of their own - confess to a closet dislike of the convention.

"Like death, taxes, and a reformed .38 Special playing the state fair circuit, they're something you just can't get away from," Says Richard Dansky of Ubisoft, a long time Clancy writer and designer, whose own escort missions can be found in the Ghost Recon installments Desert Siege and Island Thunder.

"The player's failure gets predicated on something they can't control," says Dansky, "namely, the fact that the escortee has the self-preservation instincts of a cruller at a police precinct, and so there's the endless rounds of 'I did everything right, but I still failed.'"