Guilds are really just volunteer organizations, and consequently, they suffer from a lot of the same problems. Guild leaders function as coordinators and morale officers as much as they do running the group, because volunteers are easier to lose than they are to come by. And once a guild begins to lose a steady trickle of members, it's only a matter of time before that trickle turns into a full-on waterfall. This phenomenon is called the "failure cascade." 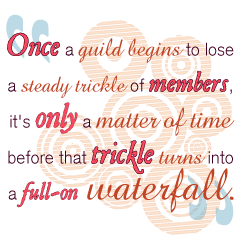 Failure cascades aren't limited to guilds, but their effects are easier to track in an MMOG called EVE Online. EVE's player base isn't broken up into servers, so events take place in one universe, which means it's impossible to run from a conflict by jumping to another server. Since player-vs.-player combat is widespread, people tend to congregate in large groups; the largest corporation (EVE's equivalent of guilds) fields over 3,000 members. And these mega-guilds can form alliances with one another and go to war.

The term failure cascade was popularized in February 2007 by "The Mittani," one of the directors of one of EVE's largest guilds, GoonFleet. He wrote, "A failure cascade is a 'tipping point.' Once the point has been reached, failures by an organization cause stresses that lead to more failure, at an ever-increasing pace." In short, when a failure cascade begins, one misfire will increase the chances of another happening until the guild falls apart.

A recent victim of failure cascade was an alliance called Lotka Volterra (LV). They inherited a niche of space after the previous alliance in that area decided to move. They had an estimated 2,500 members at their peak.

War broke out between LV and a rival group of alliances, in January 2007. LV lost a few early battles in key sections of space, which allowed their enemies deeper into their territory. In just a few weeks, the advancing enemy destroyed LV's titan ship - the largest, most expensive ship in EVE, which takes weeks to build. Days after that battle, Lotka Volterra's directorate went missing. From that point on, LV's resistance grew weaker as they lost more and more territory. They disbanded in April 2007 but had stopped operating as an entity two months before. I tried to interview a former Lotka Volterra member about what the last few weeks were like. Before declining, he said that those were bad times.

The Psychology of Failure
When you look at groups that hit a failure cascade, you notice patterns. If you were to chart an alliance's membership over time, once you reach the failure cascade, you'd see a downward-sloping curve with a dispersal of cliffs. These are the two forces at work in that alliance's failure cascade: the individual and the guild. Individuals leaving the alliance cause the shape of the slope, and the cliffs signify the points at which an entire guild has left an alliance.

This happens because the failure cascade is the inverse of a network effect. Websites like MySpace define their value by the people that use the service just as guilds define their quality by their members. As bad events cause players to leave or become inactive, the quality drop leads others to do the same in a spiral that rarely stabilizes, until no one is left.

To an individual, a failure cascade brings with it a change in that person's identity. Instead of saying he is a member of an alliance, he shifts his perspective locally, to his guild or himself. These changes can fracture an alliance and set the stage for its member guilds to fight among themselves.