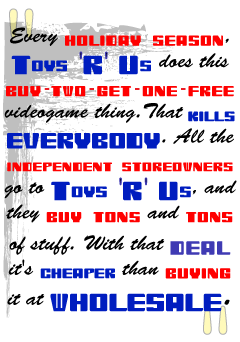 Out-of-store promotions can be tough, too. Independent stores might have a small budget for local cable or movie theater ads, but they can't compete with the mega-chains' marketing muscle. "Every Sunday you open up the paper and see these circulars for Circuit City and Best Buy, and it's a downer," Halligan says. "Every holiday season, Toys 'R' Us does this buy-two-get-one-free videogame thing. That kills everybody. All the independent storeowners go to Toys 'R' Us, and they buy tons and tons of stuff. With that deal it's cheaper than buying it at wholesale."

It all adds up to a nearly impossible market for an independent store to break into. "There's no uniqueness," says Beverley Liedler, co-owner of southern New Jersey's Game Zone stores. "If you're in the apparel industry, you can have a certain look in your store, you can be targeting a certain audience that is not gonna be in the big box retailer or the chain. It's very hard to have a unique product in the videogame business because we don't create the demand, the television does, the publishers do, and you can't be more attractive price-wise because there's nothing to work with there."

So how do the independently owned stores set themselves apart? Just being knowledgeable about games and the industry can be a big help. "When people come in, they know that they can trust what we tell them," says Demotta. "I know there were some dog systems that have come out, like the N-Gage. We just steered people away from them, whereas other places had a big display of it and had to sell it. It's part of their corporate mandate; they had to do that. We could tell them, 'This is going nowhere, avoid it like the plague.' And sure enough, it disappeared."

Building a sense of community also helps. Chicago's Game Champs store has 11 flat-screen TVs and hosts tournaments to create a social hub for the area's gamers. "We try to put an atmosphere here for gamers where people like to come in and try the games out and play them," says Game Champs manager Michael Jones. "We're building a more community-based atmosphere than a small cubicle to come in and go home to your own little world. ... I like to have gamers come in, talk about a game, play with each other. It turns it into more of a social thing."

Building up a unique selection can also work. Videogames New York owner Giulio Graziani says his store has become a place people seek out because of its extensive gaming collection. "If you come in our store, there's probably 60,000 games. A lot of the stuff is touchable, so they a lot of people feel the chance to touch a little bit history, that is what makes us so unique. We are like something between a museum and a videogame store. ... When you don't find something, you come to us, always. That's what we're famous for. It might be more expensive, but we have it. That's what we're building out reputation on."