Despite all the challenges with running an independent store, there are cases where it can be helpful to be smaller and more nimble. "In some ways it's easier for us," Liedler says. "We have three stores, and when you're trying to get a quantity of Wiis for three stores - 60, 100 pieces - is a lot easier to obtain than 100,000 if you have 5,000 stores. We have more flexibility in trying to obtain the products we need."

That flexibility can also let you take advantage of opportunities, if you're sharp enough to see them coming. "Sometimes you've got to be bold," Demotta says. "There's a game called Sniper Elite for PS2. The game's been out of print for a long time. We found a supplier that was selling them, we brought in 20 copies, and it took a while, about a year, but eventually all 20 sold. You make your money on that stuff because nobody had it. If we were a public company and somebody said, 'Why are you buying this obscure title? When do you think it'll sell, a year from now? I'm not gonna do that. It's a waste of time.' [With a big company] you have to make money every quarter, not four quarters from now." 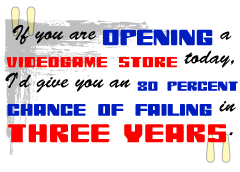 Even so, the independent retailers that have stuck around are pretty pessimistic about the future of their small slice of the market. "The risk is too high compared to the benefits," Graziani says. "Between me and you, there's too much bullshit in this business. If you are opening a videogame store today, I'd give you an 80 percent chance of failing in three years."

"There's a lot of businesses you could go into that would be a whole lot easier than this one," Liedler says. "Our business is getting narrower and narrower as far as number of competitors - and they're just getting bigger and bigger. Between the chains and the big box it's just not an easy business to continue being successful in, and the number of stores that have been successful is shrinking. It's a shame because it kind of takes some of the uniqueness away from the business."

But there are some who manage to stay positive. "Since the day I opened nine years ago my sales have gone up every year," Graham says. "I'm not rich or anything, but my customer base is expanding, my sales are growing every year, I just opened a new store and we're going to open a third store. ... Let me tell you, if you walk around in your store all day long selling videogames, saying, 'Woe is me, sales suck, I hate this place,' people aren't going to come back. You've got to be upbeat, you've got to be positive, you've got to feel good, you've got to be smiling, you've got to be happy, and your customer's going to feel that when they walk in the door. This is really a super-positive place to walk into."

Kyle Orland is a videogame freelancer and co-author of The Videogame Style Guide and Reference Manual. He's written for a variety of print and online outlets, as chronicled on his workblog.