On the last weekend of August 2007, tens of thousands of gamers descended upon downtown Seattle to attend the annual Penny Arcade Exposition (PAX), simultaneously making it one of the most influential consumer-facing game conventions in the world. Running PAX is a daunting task, reserved for a handful of full - time Penny Arcade (PA) staffers and supported by 300 high-powered volunteers. Sporting long-sleeved black shirts with "Enforcer" emblazoned prominently on the back, they are the lifeblood that makes the PAX machine function. They are visible and invisible, simultaneously omnipresent and scrambling behind the scenes to make sure everything runs according to schedule.

Enforcers come from all over the world. Some live in downtown Seattle just blocks from the Washington State Convention and Trade Center (WSCTC); others come from California, Canada or even Australia. "We have people who work in the medical field, lawyers, programmers, graphic and game designers, photographers, retail managers, people in the armed forces, writers, musicians, scientists, and a very awesome masseuse," says one Enforcer, "Chiparoo." (Everyone goes by his online handle; it makes thing less confusing over walkie-talkie.) "There are lots of different shapes, sizes, styles, opinions and backgrounds, but we're all connected simply because we are all some level of nerd." 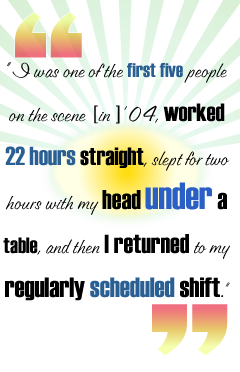 They're a hardworking crew. Even back in 2004, when PAX was a round-the-clock affair, the Enforcers kept things organized. "I was one of the first five people on the scene [in] '04, worked 22 hours straight, slept for two hours with my head under a table, and then I returned to my regularly scheduled shift," says "Heels," an original Enforcer.

In 2004, "Princess RedDot" (better known as PRD), the PAX Chief of Staff, asked Penny Arcade fans for assistance and ended up with an initial group of 40 volunteers. "There was never a doubt that we would need volunteers. We had some pretty ambitious ideas for how many things we wanted to stage in one weekend, and it was going to take a lot more people than we had in the office." Since then, the Enforcer ranks have grown steadily. In recent years, the number of applicants has skyrocketed.

For almost half of the current Enforcers, 2007 is their first PAX as part of "the Black." For them, life as an Enforcer actually starts sometime in late January when the call goes out for volunteers. Some of them have prior experience staffing other conventions, but becoming part of an established community can be overwhelming for newcomers. Being accepted as an Enforcer includes access to the private Enforcer forum and IRC channel. "Once you sign up, you find you have about a hundred good friends you just don't know yet," says "MomGamer."

The first official PAX activity takes place almost two weeks before the doors open to the public. Preparation takes time, and over 100 volunteers show up to SAX, the pre-conference bag-stuffing session. Volunteers slowly trickle into the building through a non-descript side entrance. They are cheerfully greeted by "mygiantrobot," who ushers them into an otherwise empty convention hall where volunteers are busy assembling over 20,000 gift bags.