Nintendo does it too much, Sega didn't do it enough, Sony sucks at it and Microsoft has never done it.

I'm talking about the inevitable console manufacturer's temptation to redesign old machines and attempt to sell them to people who either already have one or clearly didn't want one in the first place: Slimlining!

While we lowly humans tend to get bigger and less functional as we get older, our beloved game consoles seem to follow an opposite trend; consistently growing slimmer as the years drag on. Their innards are compacted and rationalized, unused features are lanced from their sleek new bodies and their prices are marginally reduced.

It appears to be a natural part of the technological aging process, but is this inevitable slimlining of consoles for our benefit, or the manufacturers? Let's take a look at some of the most noteworthy systems to have been run through the redesign wringer and see if slimlining signals the death knell of a console or the perfect opportunity for the spendthrift game vulture to swoop in and pick at the juicy carcass of a well established format.

Retro Reborn
The classic Atari 2600 harbors one of the best-known attempts at picking up sluggish sales and cutting costs in one swing of the managerial axe. No one was particularly using the machine's "option switches" when they were reduced from six to four, but it broke gamers' collective hearts when the wood-effect veneer was replaced by the gaudy sheen of black plastic. 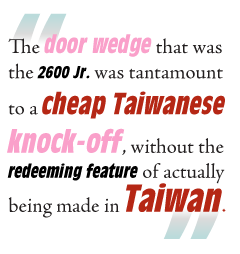 But it was a time of sharp angles and inexpensive experimentation in pseudo-futuristic design. We were watching Knight Rider on TV, Tron was lighting up the cinema screen (literally, not financially) and DeLoreans were about to speed around the corner at 88 mph. The post-modernistic style of the 2600 was going the same way as the console's sales, and Atari needed to give it a cheap shot in the arm. The door wedge that was the 2600 Jr. was tantamount to a cheap Taiwanese knock-off, without the redeeming feature of actually being made in Taiwan.

The Sega Master System and Genesis endured similar treatment further down the line, as did the Super Nintendo. All three machines were streamlined, reduced in size and given one final sales push as a plentiful budget system for poor people and foreigners.

As hard as people were on the SNES 2 and 2600 Jr., a penitent man could see the value of a re-imagined generation. There might not be many new games on the horizon, but the sheer tonnage of pre-existing media available for these old campaigners was a testament to their worth.

How many people, I wonder, waited until Sega, Nintendo and Atari decided to let their generals fight one last battle with honor, then plundered the battlefield for a wealth of quickly forgotten treasure? The kids in my neighborhood wanted nothing to do with a system once its replacement had arrived, despite the substitute often proving to be a damp squib next to its predecessor.

The Game Man and Boy
Not all slimlining is about clearing factory shelves of old chattel. Nintendo's mastery of the hand-held gaming market has been nothing short of flawless for over 25 years, due in part to slimlining.