Alongside infallible portability travels a cyclical quality to the Big N's hand-held gaming philosophy. While rampant slimlining is certainly a significant aspect of progressive design on Nintendo's drawing boards, it seems to stem not from greed but from well-learned lessons.

The Game Boy was a license to print money for Nintendo, though its popularity wasn't directly proportional to the system's quality. It's essentially famous for delivering Tetris to the world in a convenient package, but even by 1989's standards the screen was small, blurry and mounted on top of too many batteries. Here was a potentially awesome system that was actually in need of slimlining.

Perhaps this wouldn't have been quite so apparent had the Game Boy itself not been a beefed up version of Nintendo's Game & Watch series. It was one of the few times a game system evolved into a fatter, more ambitious version of its former self; swollen with add-ons and improvements rather than refined and ergonomically minimized.

You can't blame Nintendo for sticking with a winning format, though. And the Game Boy's children were naturally more athletic in their build when it finally came time to re-enthuse the world's gaming population. The Game Boy Light, Game Boy Pocket and Game Boy Color all took after their predecessor in appearance, but with the kind of trim physique that finally made good on the Game Boy's promise of pocket-sized gaming. 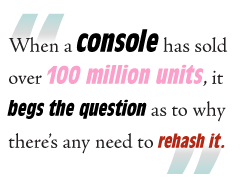 And yet, the obvious re-marketing of these slimlined versions smacked of the desperation that can repel a consumer from 50 paces. When a console has sold over 100 million units, it begs the question as to why there's any need to rehash it - people owned Tetris and Super Mario Bros. already, and after such global proliferation, it was a lot to ask every third gamer in the world to replace his hand-held system for the sake of a smaller battery compartment.

When it came time for the Game Boy Advance, Nintendo seemed to drop its wallet on its head and suffer a decade's worth of amnesia; returning to a superb concept with a bulky casing and a rubbish screen, also closely related to the old Game & Watch series. Without Tetris waiting in the wings to sell the GBA to every two-thumbed player on the planet, it quickly revisited those overused drawing boards and made the backlight hacks people were forced to do at home into something more official.

The Game Boy Advance SP is perhaps one of the first examples of slimlining done right. At least the damn thing went in your pocket and lived for long enough on its internal battery to cope with a bus ride and a few days worth of extended coffee breaks. The sexy SP's folding construction and rock solid illuminated screen shunted GBA sales in a way that more than tripled the system's initially breathless lifespan and gave it some street cred in the process.