As if the SP wasn't quite small enough, the Game & Watch blueprints were then raided once again for the GBA Micro - a piffling little keychain of a toy that rivals the game cartridges for dinkyness. Quite what Nintendo's reasoning was behind the Micro, it's difficult to say, yet it's undeniably sexy and rife with support.

Jaws dropped when the DS arrived, though in many respects we really should have seen it coming. Once again, the Game & Watch model was resurrected in the immortal, hand-held Donkey Kong style. Nintendo can reasonably be accused of repeating its mistakes - the DS was a fat and unattractive system akin to the Game Boy and Game Boy Advance - before quickly repenting and redesigning. The DS Lite slimlined the ugly original into the gaming industry's catwalk supermodel, and although most of those improvements were distinctly superficial, it proved a hit with the punters and rocketed the Dual Screen system into sales orbit. 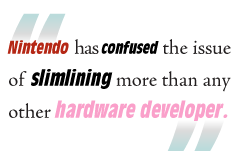 Nintendo has confused the issue of slimlining more than any other hardware developer. Has it redesigned consoles to save on manufacturing costs? The GBA SP and DS Lite suggest not, though the Micro does raise that idle question. So, then, is it for the benefit of the gamer? Or is the Big N simply correcting mistakes it insists on making with every new console? Whatever the reason, at least we, the gamers, wind up with a hot electronic babe on our fingertips - eventually.

Sony? Bony.
Is it any way to celebrate the launch of a next-generation console by releasing a "slim" version (which turned out to be the electronic equivalent of Jivaro head shrinking) of the system that came before it? That's what Sony did to both the PlayStation (now, and forever, dubbed the PSOne since it was re-engineered into a Fisher Price toy) and the PlayStation 2.

These awful, tacky, little, cheap knockoffs of once great consoles - their slowing sales no longer sufficient enough to stay Sony's cruel marketing hand - were callously paraded before the public in their underware after a brutal and unforgiving slimlining.

While there was no reason to shrink the PS2, it may, in retrospect, have been a prophetic opportunity to give it one last push while the console's third incarnation struggled to be born by medieval cesarean section. The slimlined PS2 even saw a resurgence of third-party support once the PS3 proved such a difficult platform, and as we look back now at the vast and sprawling sea of Platinum Collections under the PS2 banner, there's a gold mine (well, Platinum mine) of gaming value to be had.

And yet, even today, the slimlined PS2 struggles to seduce. Gamers seem more intent on driving up the bidding costs of the original design than embarrass their TVs with a fiddly little stillborn, flip-top novelty. A most unfitting end to a great console, and one clearly designed to wring a few extra drops of blood from a stone that deserved better.