On the hand-held front, trying to convince people to watch a three-inch TV never really paid off for Sony either, so half the PSP's features went immediately unused. Slimlining the concept that the company made such a gigantic fuss over in the first place would cost far too much corporate face, however, so it's no wonder Kaz Hirai recently went on stage at E3 and suddenly found himself trying to remember exactly why Sony had developed the PSP Slim.

The Slim's TV output is a top-notch feature, though 10 seconds on Google will uncover a chorus of old complaints about the lack of this feature on the original model. Correcting such mistakes and paying obvious attention to consumer demand is a noble effort for a big company, of course, so the PSP Slim deserves some congratulation. And yet this particular slimlining smacks of one last sales push; an attempt to take back some of the ground Sony won before the DS went Lite.

It's a little difficult to see clearly in the blazing noon sun of the PSP, but those could well be vultures circling high above Sony's hand-held. Give it another few months, carrion gamers, and the PSP might be a rich bone yard of delicious, dead meat.

Which brings us to current-generation consoles.

Slimlining Today for a Better Tomorrow
Certainly two-thirds of the next-gen systems appear, on face value, to be desperate for a good, hard slimlining. After all these years, Nintendo finally seems to have bypassed the chunky, over-featured stage of its Wii console and gone straight for the slimline model, though the same can't be said of the other two.

Microsoft is still a stranger to the concept of slimlining. True, it's only had one system to practice on, but that wonderful machine has been dropped like a hot brick by Bill's Boys and won't be seeing a slinky, miniaturized version of itself (though the home brew scene has gone on to unlock the massive media center potential of the original Xbox - those willing to crack open the casing on their old warhorse should do a search for XBMC and bask in its radiant glory). 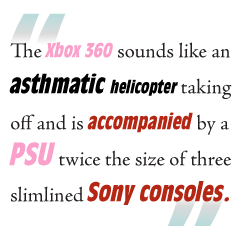 This doesn't change the fact that the Xbox 360 sounds like an asthmatic helicopter taking off and is accompanied by a PSU twice the size of three slimlined Sony consoles. Coupled with the 360 being something of a hardware gremlin zoo, rationalization and sound proofing would be a welcome, if costly, update.

Those costs, of course, would be a drop in the ocean if the PlayStation 3 were to be subjected to a much-needed slimlining. A console that looks like (and is comparable in size and cost to) the severed front end of a Lamborghini that would look out of place and upside down on the bridge of the Enterprise needs a careful and considered tweak of its hardware wardrobe.

A Newer, Slimmer You
What future slimlining of our current-generation consoles will signify, only time will tell. But paying attention to the changing shape of a game system provides consumers with a wealth of body language and an inside glance at the intentions and deliberations of the big companies. Slimlining is corporate psychology laid out on the consumer couch, cryptically conveying a truth the company fears to speak out loud. So keep an eye peeled for warning signs before parting with your hard-earned cash.