I just want to talk about all those comics, see? All those shitty, amazing comics ...

Comics are amazing. They took me in childhood, and I have been riding the wave ever since. They offered escape, inspiration and a moral foundation for the child I was and the man I am today. The brilliant writer of 100 Bullets, Brian Azzarello, recalls in an interview being told by a lawyer of all people "novels are about what people think; plays are about what people say; and film is about what people do. And comics is about all of that, or has the potential to be about all of that." All these elements can be found within your modern comic book, and this is the medium's greatest strength. Comics can provoke thought, can make us laugh, cry and cheer. They can be stories of high adventure or visit the deepest depths of man's despair. They can be action-packed, gory spectacles or heart-warming tales of love. The best comics are all these and more.

And there are a lot of them. Enough to confuse even a veteran page-turner. So, if you're new to modern comics, what should you be reading?

Instead of looking at specific comics, it's best to look at specific creators. The best way to determine if a book is going to be any good is to simply look at the names of the people actually creating it, not the book itself or its publisher (all the publishers produce shit equally, and most generic characters have had both great books and God-awful ones).

Brian Michael Bendis, currently the top writer at Marvel, has written more consecutive Spider-Man comics than Stan Lee, and has written the best Daredevil run ever written. He has a dramatic, theatrical dialogue style, which allows him to do very unique character work. He's not perfect, though: Critcs say his plots are generally thin and that he tends to spread a story over too many issues. Valid points, but he's dramatically improved with each new book he's written. He's currently working on New Avengers with knockout artist Leinil Yu and Mighty Avengers with fan favorite Frank Cho. It would also pay to keep an eye out for the next big Marvel event, Secret Invasion, which will also have Yu on pencils. 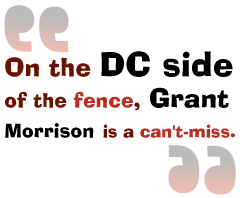 On the DC side of the fence, Grant Morrison is a can't-miss. Morrison's work is both imaginative and complex, brilliantly so. He is generally revered as a legend, and he's quickly closing space with greats like Alan Moore (gasp!). Other writers want to be him, and readers want to read him, despite all the crazy Magik nonsense he seems to have a golden boner for. He's currently writing Batman with solid artist Tony Daniel, as well as the amazing All Star Superman with Frank Quitely. Morrison and Quitely go back to some fantastic work together, including New X-men and the wonderfully tragic and violent We3.