A robot spider with the head of Colonel Sanders has kidnapped Pamela Anderson, and only two chickens can save her. That's the premise of a recent online game developed by People for the Ethical Treatment of Animals to increase awareness for their Kentucky Fried Cruelty campaign. In the recent advergaming boom, businesses are enjoying great success using games to promote their products. Now, some activists are hoping they will be just as good at bringing attention to their causes. PETA's game, called Super Chick Sisters, is at the forefront of this new politically charged genre, which has been coined "anti-advergaming."

Super Chick Sisters isn't PETA's first venture into web-based gaming, but it has been their most ambitious and successful one. PETA's Marketing Manager, Joel Bartlett, says almost 500,000 people have played it through PETA's KentuckyFriedCruelty.com website. There, visitors can get more information about fast food chain KFC's treatment of chickens, discover ways to protest against KFC and view a list of celebrities who have signed a PETA petition.

"People come for the game and stay for the shocking videos and information about KFC's cruelty to chickens," Bartlett says in an email interview. "It is always a challenge to promote a serious message to our tabloid-filled and entertainment-focused society. People don't want serious news conferences - they want to be entertained. While we do it all - using both hard-hitting and softer approaches - PETA often wraps our serious messages within eye-catching, light-hearted stunts. The most famous example of this is our 'I'd Rather Go Naked Than Wear Fur' campaign. Super Chick Sisters follows this strategy. We're pulling people in with humor and a good time, but we've ensured that the message is still strong and will reach all players."

Super Chick Sisters is an homage to the Super Mario Bros. games, looking and playing a lot like Super Mario World. Players control either Nugget or Chickette, two plumber's-cap-wearing chicks that embark on a quest to save a missing Pamela Anderson, a vocal PETA supporter in real life. If you finish the game, Anderson becomes a playable character, in a full Princess Toadstool costume no less. 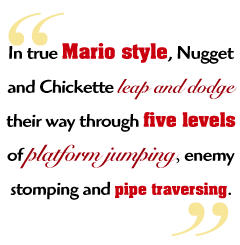 In true Mario style, Nugget and Chickette leap and dodge their way through five levels of platform jumping, enemy stomping and pipe traversing. Levels take the heroic hens through settings like a KFC restaurant, where huge red-and-white-striped buckets ooze dark red blood and menus offer "Tortured Beakless Baby Bird" and a "Cruelty Value Meal." Bashing question-mark blocks sometimes brings up chunks of tofu that make the chicks double in size. Instead of coins, the duo collects little, winged chick heads for points and extra lives. The aforementioned robotic spiders are the game's only enemies. And regardless of your feelings about KFC, their giant Colonel Sanders heads are extremely creepy.

Cut-scenes between levels show the trials and tribulations of the real Mario brothers, who were late to respond to Pamela Anderson's disappearance due to a severe case of Wii-itis (eventually treated by Dr. Mario). The PETA designers take some pointed but loving digs at the way Mario and Luigi treat animals in their own games. At one point, a rebellious Yoshi refuses to work with the pair and eventually joins a group of People for the Ethical Treatment of Turtles protesters fighting for the rights of Koopa Troopas.