Have you heard about alternative reality games (ARGs) lately? Of course you have - they're everywhere. From college campuses holding mini-ARGs for new students, to promotions for movies, videogames, music and books, to experimental games by universities, discussions on world oil shortages and terrorism, ARGs have arrived in force. They're being embraced wholeheartedly by marketers, academics and traditional entertainment industries and are growing into their own unique market as the idea of returning to the basic concepts of play permeates the population worldwide.

It's true ARGs have been in the media for longer than you'd suspect, but the curtain between player and "puppetmaster" seems less important than ever. Studios and individuals are not as reluctant as before to claim credit for their work while it's still in progress, something the media has picked up on swiftly. While ARGs used to rely on word of mouth and cryptic hints to build hype, "pre-game" announcements are now considered commonplace in 2007 and expected to continue.

"The game got press attention right away. It built up as our launch date loomed, and during the game, the idea of [World Without Oil] zoomed around and around the world. With the combination of what was happening then with oil prices, the novel aspects of the game and Jane McGonigal's insights about the potential for games to shape the world really resonated," says Ken "Writerguy" Eklund, World Without Oil's creator. 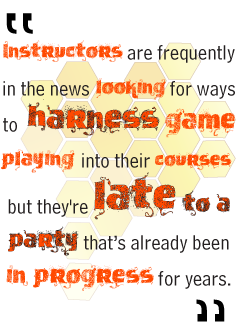 Instructors are frequently in the news looking for ways to harness game playing into their courses, but they're late to a party that's already been in progress for years. Serious and educational ARGs have slowly and steadily been underway since WWO's close. Never Rest (an instructional ARG) focuses on terrorism, and Western Washington University's Help Me Solve A Mystery engages students to use their critical thinking skills. In these new games the product being advertised isn't a movie or a car - it's simply knowledge. Over at the University of North Texas, Dr. Scott J. Warren is using a hybrid of Second Life and ARGs to teach his Computer Applications course through his project, called "The Door." While expected to grow in number, it is still unclear how well these serious ARGs will perform in the gaming wild.

Like academia, the mainstream media is also catching on. ABC's Fallen ARG picked up three awards over the year, including an Emmy for Outstanding Creative Achievement for an Interactive Television Program. ARG tie-ins to television series are not new, although this year strengthened the ARG media foothold. Networks incorporated the genre as a plot device (Numb3rs) and used ARG-like elements to promote shows (Heroes) and channel launches. Sequels and spin offs have started to crop up with increased frequency (such as KateModern and Mission Anchor Cove from lonelygirl15), and they're likely to continue with positive audience response.

Letters to the Editor: Play to Pay The Escapist Staff 0 Comments