We can smell the advent of participatory content on the changing winds of our increasingly open-source world. In a recent article in The Escapist, Chris Dahlen wrote about a future where moviegoers contribute to cinematic franchises and worlds. Our participation may someday determine the direction of a sequel; rather than speculate and fantasize on forums about our beloved characters' futures, we may someday be able to helm those destinies ourselves.

Someday. But what if it's already happening? 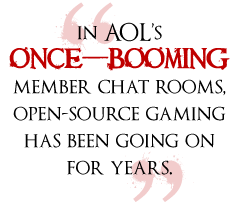 In a nearly forgotten niche of the internet, in AOL's once-booming member chat rooms, open-source gaming has been going on for years. Users have taken the plotlines of popular media and become those characters, inserted their own, invented sequels and visualized new geography. They're not intrepid designers; they're more like novelists. They call themselves roleplayers, but they've got no avatar, no pen and paper, and hardly any rules. It's the domain now of an enclave of the few, though it was once a bustling pastime. Now, like mad Nero in a burnt-out Rome, they remain behind, overlooking the city they built and helped destroy.

Its heyday was the late '90s - 1997, to be exact. Square-Enix was still Squaresoft, and they'd just released Final Fantasy VII. That game is famous, or perhaps infamous, today for bringing a new army of gamers to the table. Starry-eyed and energized, this new generation of RPG-lovers would demand Japanese CGI, lengthy full-motion video and stormy, emotional storylines forever after. The love for FFVII was in some circles so great that the game itself could not contain it. The most devoted spilled into these corners of AOL's chat software, which was enjoying its peak popularity at the time.

Thus, Final Fantasy VII roleplay on AOL - usually referred to simply as "FFRP" - was born. It started innocuously enough as an extension on somewhat common chat behavior: the interspersion of action-based descriptors with chat text. It's still not unusual to personify the dialog onscreen with small human movements, often written bracketed with some sort of punctuation mark to differentiate it from spoken text - like ::nod:: or *yawns*.

The FFRPers saw potential here. They had Cloud, Aeris and Sephiroth screen names, and they could make those names behave as they wished. Chat users began a gradual evolution away from themselves and into the FFVII world. The member profiles, once tidy fields of personal facts like age and occupation, became more like character dossiers. With the advent of HTML, users could ignore AOL's provided fields entirely and create an elaborate back story or their own prosaic description of the game's events.