In massively multiplayer online games (MMOGs) player actions seldom matter. Although developers and publishers tout the persistent aspect of their online worlds, in reality, these worlds rarely change in any meaningful way. Enemies respawn; territories get reclaimed. It makes for a homogeneous experience, but at the same time it betrays the futility of any in-game action; why slay the monsters if they're going to show up again tomorrow? On the rare occasion that something does change permanently, it's usually a tightly managed affair run at the discretion of the developers.

However, once in a blue moon, a player will make a lasting mark on a game and influence the social consciousness of the entire industry. Fansy the Famous Bard is one of those people, and this is the story about how a server with no rules made an exception for one person.

You're In Our World Now
The tale begins in EverQuest (EQ), Sony Online Entertainment's (SOE's) first entry into the MMOG field. EQ was the first MMOG to flirt with mass-market success, drawing in half a million subscribers when Western competitors struggled to bring in even one-fifth that. 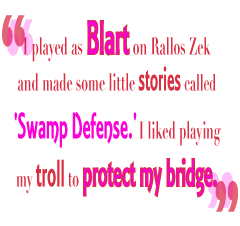 EQ was a great experience for Fansy. For him, EQ was an opportunity to embrace the roleplaying potential of a virtual environment. He had discovered EQ through an advertisement in PC Gamer. "The picture had a bunch of characters, and one of them was a suave elf. When I saw his moustache, I knew I had to become him." Of course, that was just the beginning of his EverQuest experience. Like many other players, he started out as a roleplayer. "I played as Blart on Rallos Zek and made some little stories called 'Swamp Defense.' I liked playing my troll to protect my bridge. It was a very fun time, probably the most fun I had in a game. I giggled the entire time."

Stranger in a Strange Land
Of course, EverQuest's success depended on keeping players happy. Specifically, this meant finding ways to discourage unwanted behavior and isolate disruptive players. To this end, SOE created the Sullon Zek server. "It was billed as a big hardcore player-vs.-player (PvP) server, so all the trolls, cheaters and jerks from every other server came to Sullon Zek and made evil characters, because they were evil at heart! On every other server, good-aligned characters dominated."

On Sullon Zek, players were divided into teams based on their chosen alignment: good, neutral or evil. People mostly joined the evil faction, which seemed only natural for a server with only one rule: Players were invulnerable in PvP until they reached level six. This was a carryover from the standard PvP servers, where new characters were given an opportunity to learn their way around before diving into the PvP experience. Otherwise, Sullon Zek was an anything goes, no-holds-barred experiment in unregulated gameplay, earning it a reputation as EverQuest's "penal colony."