Britain's rich heritage of excessive drinking isn't the singular pastime it might initially appear to those with healthy livers, and the common pub has provided its clientele with all manner of alternative time-wasting activities. While my generation has known the pub as a legitimate venue of fruit machine gambling, pool and darts, the local boozer has a long and ignoble heritage of multiplayer gaming.

It's impossible to say how long people have been playing pub games, though I dare to venture that games have been in play since the first time a bunch of bored blokes gathered together and knocked a few back. Really, it's inevitable that placing a collective of mildly soused people in one room is going to generate some form of unruly competition, even if it's nothing more sporting than tortoise racing or eel slapping (that's not a euphemism, by the way).

It's equally inevitable that such alcohol-fueled jocularity would be taken with a strict combination of extreme seriousness and juvenile misbehavior, but most every illegitimate sport an Englishman can boast a skillful propensity toward was born in t' local.

Thrash My Rhubarb
One of the 20th Century's most infamous pub games deserves first mention due to its inherently British (and therefore portentously ceremonious) themes: Dwyle Flonking.

One of the rarest strains of pub games, Dwyle Flonking braves the inclemency of the British outdoors, usually the pub parking lot (a dangerous contradiction, but a common one) or beer garden. Two teams of 12 partake. One team encircles a chosen champion from the other team, known as the "flonker," and link hands to dance around him in a majestic, noble and intimidating gambol known as "girting." Armed with his trusty and commanding dwyle-tipped driveller (a broom handle with a beer-soaked floor cloth on the end), he circles in an opposite direction to the girters. 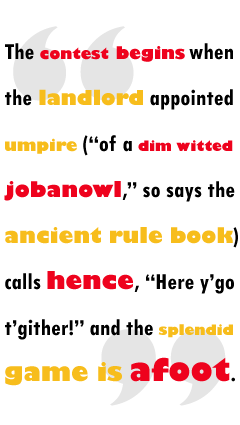 The contest begins when the landlord appointed umpire ("of a dim witted jobanowl," so says the ancient rule book) calls hence, "Here y'go t'gither!" and the splendid game is afoot.

The flonker attempts to whip the beer sodden dwyle at the girters - one point for a hit on the leg (a "ripper"), two for a body shot (a "marther") and three for a well placed "wanton" (being a hit on the head). Should the increasingly dizzy flonker swadger (or "miss"), the umpire will command he drinks deeply of an ale-filled gazunder chamber pot (so named as it "goes under" the bed) while his team mates chant the ancient mantra "Pot! Pot! Pot!"

The umpire will keep the gameplay white hot by randomly changing the direction of the girter's rotation, while imposing harsh drinking penalties on any players not taking the game interminably seriously. After four snurks (a "snurk" being each turn either team takes at girting) the winner is decided. Points are then deducted for each sober member of the team.

Even though a couple of alcoholic, out of work historians have traced a tenuous lineage of Dwyle Flonking back to the 16th Century, there never was any doubt that the game has been a pastiche of Britannic drinking tradition. But the reason I wanted to examine this particular game so closely is the insight it provides for uneducated foreigners into the dour amusement British inebriates demand alongside their booze.

Until recently, the noble drinker played the most eclectic mix of unfit-friendly sports, not for money but for the recognition of his pissed-up peers. The slot machine has changed much of that in the modern public house, making pub games tragically solitary experiences, but the traditions still reign supreme in the majority of watering holes.

Identity Of A Decade Spanner 28 Comments