Although I say tradition, the boozehound is a fickle and self-challenging creature, always eager for a new way to test the limits of his drunken endurance. It's hard to imagine anything other than darts, dominoes and pool as the kingly taproom sports, though these are more recent additions to the pub arena than most drinkers realize. The ancestors of these games have been long in their development, however, and needed no organized leagues or TV coverage to make their competitive value meaningful.

A Trip to Jerusalem
On the wall of the oldest pub in England, The Trip to Jerusalem, in Nottingham, still hangs a well-used set for playing Ring the Bull - one of the oldest such games in existence, and one that's still reasonably well supported in our taverns and pubs. A bull's (or other animal, such as a stag or pig) head is hung on the wall, and a nose ring attached to a length of string is swung by the gaming drinker in an attempt to land it on a horn mounted on the plaque - intricate in its simplicity, engrossing in its skill requirements. 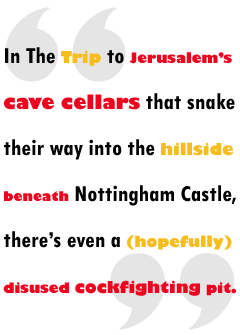 In The Trip to Jerusalem's cave cellars that snake their way into the hillside beneath Nottingham Castle, there's even a (hopefully) disused cockfighting pit - something we might turn a disgusted gaze upon these days, but another sign of the vital necessity that drunken sports have played in the ancient heritage of British pubs.

Early games like Ring the Bull paved the way for most every variation that followed, and it's easy to imagine a great many pub games finding their origins in such a pseudo sport. While a professional league will likely never come to be, Ring the Bull is a game perfectly in keeping with its surroundings. The overtly simplistic premise means a player can still enjoy a significant level of achievement as the night wears drunkenly on.

Even though pub games would find all manner of new formats, this basic template of a simple activity mixed with a well-oiled contestant in a public arena is the keystone that holds pub games aloft.

Ever since the 12th Century, when Crusaders first stopped off at The Trip to Jerusalem on their way to, well, Jerusalem, and had a few beers and a few rounds of Ring the Bull, the constant state of flux surrounding pub games has meant we have a treasure trove of semi-sporting entertainment today.

The King, The Port and Aunt Sally's Quoits
It's not difficult to see how skittles - a game that's never been more than a ball's throw from a pint of beer - evolved into the bowling and, dare I even suggest, pinball games we know so well, but it also had an effect on the development of snooker and pool. These ball and cue games might be the staple diet of a bored bar fly these days, but they were a long time coming.

A mixture of different games from all over the world gradually mutated the table-mounted skittles variant known as The Port and The King - a tabletop ball and cue game featuring a skittle at one end and a hoop at the other. Knock the ball through the hoop (using a mace) so it touches, but doesn't fell, the skittle. Not unlike croquet, players soon discovered a significantly more personal game was played not by approaching the King skillfully and respectfully but by knocking the other player into the hazards (now known as pockets).

Skittles and billiards (originally games played in the "ball yard" - a likely candidate from where the name stemmed) held many similarities in their genesis, and a great many pub games were conceived as patrons attempted to bring their outdoor athletics inside, as the nights drew in and the inclement weather became ... even more inclement. As it tends to do in England.

One Button, One Scotch, One Beer L.B. Jeffries 40 Comments

Drinks Are On Me! Elizabeth Grunewald 35 Comments