The practice of pocketing balls rather than moving one around the pseudo grass of a slate table made for more varied betting, with the "pool" of money going to the player sinking the most balls in the hazards.

The throwing game quoits (similar to the cowboy pastime horseshoes) has seen all manner of inside and outside variations, each one adding a little to the mix until the essentially simple task of chucking a ring over a stick became a rich and vibrant heritage. Aunt Sally was another throwing game that encouraged gamers to knock the pipe from the mouth of a withered old hag (known unceremoniously as Aunt Sally) using a well cast club. Possibly the forerunner of darts, this ancient game isn't played very often these days, though its spirit lives on in coin tossing games and drunken domestic abuse. 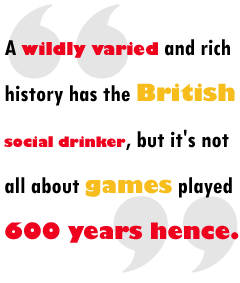 A wildly varied and rich history has the British social drinker, but it's not all about games played 600 years hence.

The '70s had a lot to answer for when landlords went jauntily continental with their pub designs; knocking down as many walls as their thrice-nicotined structures could reasonably afford to lose. The open-plan pub stemmed the throwing of darts and thrusting of cues once all manner of patronage was free to roam. The snug and taprooms were gone, and the highly focused cribbage players and agoraphobic domino jockeys found themselves disturbingly exposed. Thank Joshua Tetley that the videogame came along.

It's surely no coincidence that Pong was first tested in a bar, and met with resounding success. It tallied with the simplistic, semi-dexterous requirements first set down by Ring the Bull over 1,000 years ago and provided the kind of divergent bar-side pastime that drinking sportsmen demanded.

Although the electronic revolution also brought the abhorrent and anti-social slot machine with it (have you ever seen someone smile when they "play" a gambling machine? Not even when they land the jackpot), pubs became silver mines of popular, regularly maintained videogames during the industry's heyday. Following the Space Invaders rush, when every square yard of floor space carried a Midway special, most every British pub has maintained some kind of electronic gaming stable.

During the late '80s and early '90s, a decent JAMMA cabinet served its landlord exceptionally well, while pinball machines provided the familiar ring and clank of electromechanical contest. These days, many of the videogames have been replaced by touch screen quiz machines, though it's hard to criticize their somewhat vulgar countenance - the seasoned drinker's head is filled with otherwise wasted general knowledge, just itching to find purpose without chore. 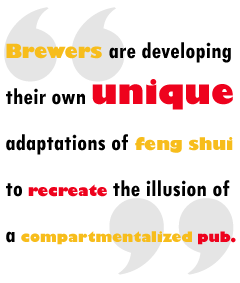 The retro revolution that's sweeping the globe isn't going amiss in the pubs and bars of Britain, either. Brewers are developing their own unique adaptations of feng shui to recreate the illusion of a compartmentalized pub using booths, dividers and even the games themselves; once again allotting space to the dartboard, the pool table and the pinball machine.

Pubs and games have always been completely inseparable, and it's reassuring to know this tradition is as strong today as it's ever been. The unfortunate invasion of the gambling machine to our taprooms has added a boorish, unskilled greed to the noble tradition of pub games, but there's still a wonderful plethora of ways for a practicing drinker to earn the admiration and respect of his pissed-up peers, even if they can't remember his magnificent victories in the morning.

Identity Of A Decade Spanner 28 Comments

Letters to the Editor: The Way We Play The Escapist Staff 0 Comments