There are many ways to begin a fantasy tale - Había una vez, Il était une fois, in geardagum, a long time ago in a galaxy far, far away ... - but they all pretty much mean the same thing: "Once upon a time." There are equally as many ways to close out a tale. "And they lived happily ever after" is the best known, but Russian folk tales often end with the nonsense "I was there and I drank mead and beer; it ran down my beard but missed my mouth." Which, I suppose, is a sort of ancient version of "I didn't inhale."

Commonly used phrases like these are often called cliché, but a broader (and less derogatory) way to refer to them is to call them formulas. The use of the term comes from Milman Parry's 1928 essay "The Traditional Epithet in Homer" in which he defined a formula as "an expression regularly used, under the same metrical conditions, to express an essential idea." Repeated phrases and epithets such as "swift-footed Achilles" or "resourceful Odysseus" in the Iliad and other ancient Greek epics are examples of such formulas.

Such formulas are not limited to epic poetry and fairytales, however; in great part, MMOG quests are constructed of similar formulas, shared not only among quests within a game but among different games of different genres.

"The storytelling in games like the Halo trilogy, and many other interactive action-adventure video games that are hugely popular, has reawakened the ancient epic tradition that gave the world the Iliad and the Odyssey, and later the Aeneid," said Roger Travis, an assistant professor of classics at the University of Connecticut, in an op-ed piece in the Hartford Courant. Travis, who has written extensively on the epic nature of videogames (including in The Escapist), is presently writing a book on the subject.

"In the days of ancient Greece, the epic emerged from a tradition of bards," he continued. "Because every performance of an epic song was improvised, the bard's re-telling of the story varied with the audience reaction on the one hand and the material of the epic tradition on the other." 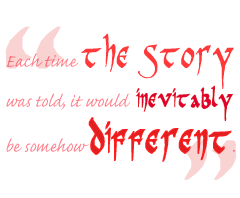 The oral epic poets of the time (known as Aoidos and later Rhapsodes) would have memorized thousands of lines of a story - or, more likely, many smaller stories and myths - and then incorporated them into a larger tale. Each time the story was told, it would inevitably be somehow different: the same events reworked in new ways based on the whim of the poet and the desires of his audience - As You Like It, indeed.

Despite the changes, the basic storyline would always remain the same; Troy would always fall, and Odysseus would always make it home, just like Master Chief always saves the world, and Lord British always survives for another sequel. Little bits of each tale would contain similarities in structure - formulas - which not only allowed bards to more easily memorize long stories, but likely also allowed the audience to more easily understand who and what was being referred to (consider that the Greeks had two heroes named Ajax, and the first reference to Beowulf on line 18 of his epic tale is not to the eponymous hero, but to another guy named Beowulf).

Smile and Nod: That Which Does Not Matter Russ Pitts 4 Comments

Letters to the Editor: The Way We Play The Escapist Staff 0 Comments