I figured out I was a geek and a gamer somewhere around the age of 6. Someone in the school district decided it was a good idea to put first graders in front of a keyboard and teach Basic programming. It was love at first sight: the clatter of keys, the use of a tape cassette player to save programs, a million scrolling lines of "I love my mom" ... simple and fun. Even more fun when you could load up simple ASCII games from the cassettes and practice typing or shoot critters with the spacebar. However, in those days combining the love of things that went beep with being a female was a recipe for social disaster, which pretty much describes my formative years in a nutshell.

Growing up a gamer I heard more than once the clichés about "birds of a feather" and "like calls to like," but most of what I found was boys that didn't appreciate being beaten in Tetris. It wasn't until I was 17 that I found my particular gaggle of gaming geeks and went from being a lone gamer in the wind to a part of a community. So this is us, where we came from, where we are and a glimpse into our plans for world domination (we're always on the lookout for new minions).

The Past
In the summer of 1993 I started college and enrolled in an archery class at the school. It made sense that if I was required to take PE credits for graduation that I choose a class that didn't require running or gym shorts. Like most gamers my legs haven't seen the light of day in years, and I didn't want to blind anyone. Not to mention archery is generally on the gamer list of cool things, as demonstrated by any fantasy game where there will be at least one range-based class that uses a bow.

It was there that I first met Jay, a CS major who aspired to write videogames when he graduated and participated in a medieval combat group every Thursday night. Strangely he didn't freak out when I asked if I could come and see what they did. He actually seemed rather pleased to have a recruit. It only took attending one practice to see why. The practical reason for new blood was that they were looking to increase their combat community - more folks on the field was more fun - but I also discovered that new recruits were seen as good cannon fodder since we weren't smart enough to run away and still a little too scared of being hit to hit back. I have to admit in years later that I partook in newbie baiting, but how else does a newbie learn when to hold position and when to scatter? 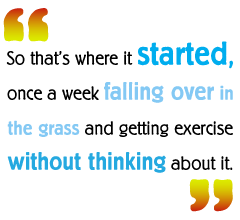 So that's where it started, once a week falling over in the grass and getting exercise without thinking about it. Likely that's where it would have ended except for two things: the sense of community that made me want to spend more time with these gamers, and Julie, Jay's wife (she says she wants to be referred to as Her Royal Highness Supreme Goddess of Everything, but I refuse to type that more than once). Julie was, and still is, the gamer equivalent of a cruise social director and a none too secret Solitaire addict. She not only supported her husband's love of games, but played them with him and opened their home for LAN parties, board gaming night and bi-weekly tabletop RPGs.