Three day weekends are often dedicated to trying new tabletop systems or the latest console game: Guitar Hero, Dance Dance Revolution and old school, head-to-head Tetris and Final Fantasy XII top the list of favorites. Saturdays are tabletop nights with Dungeons & Dragons 3.5 and Mage in the current load, and including at least one friend playing via his laptop from three states away. Birthdays are a chance for the exchanging of gaming gifts and recently creating game-based cakes.

The children who once ate dice are now gamers in their own rights, and can be heard running their own D&D games or joining in the guitar mashing madness. Their schoolmates think they're weird. They all know they're gamers, like their parents before them, and like, hopefully, their children to come.

The Future
Technically no one can say what the future holds, but we have some good ideas. I will be marrying my gamer sweetheart, Bryan, in the spring. We've been gaming together for the last 12 years and are currently debating whether we want the Wii or an Xbox 360 on our wedding registry. The PS3 is out of the question unless it gets a better line up of games, much as we like Rock Band.

John is crafting plans for world domination, which requires minions and a machine with lots of buttons and levers. Kelly claims the position of head minion, and the rest of us are the staff. We figure world domination should be simple as compared to planning a raid or running a task force. Now we just have to figure out which mobs to camp. 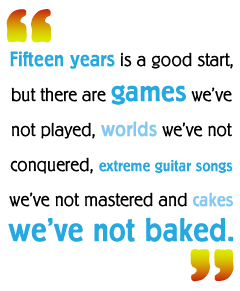 Other than that the plans are business as usual. Fifteen years is a good start, but there are games we've not played, worlds we've not conquered, extreme guitar songs we've not mastered and cakes we've not baked. We figure another 40 years or so and we'll all be committed to the same rest home where we will demand a fully networked game room where we can sit around in our comfy rockers with large print RPG manuals and roll for initiative while gumming our Cheetos and Mountain Dew. Shouldn't every gamer have it so good?

Jana Stocks is a freelance contributor to The Escapist.